ROME (AP) — Far-right leader Giorgia Meloni, who is poised to become Italy’s next premier, vowed Saturday to put national interests first in tackling soaring energy costs as she made her first public outing since her Brothers of Italy party won the most votes in the country’s national election.

Meloni addressed farmers and producers at an agricultural fair in Milan sponsored by Italy’s influential Coldiretti farm lobby. She emerged from a week of closed-door meetings with allies and the outgoing government following the Sept. 25 vote that is poised to give Italy its first far-ight-led government since World War II.

Her appearance came after Germany this week announced it would spend up to 200 billion euros ($195 billion) helping consumers and businesses cope with surging energy prices due to Russia’s war in Ukraine, while refusing to back a European price cap on gas, as Italy and other countries have sought.

Meloni said if her government takes a similar action, it shouldn’t be seen as some populist, nationalist reaction but rather a “lucid” strategy to “defend national interests to arrive at common solutions.”

“Italy’s posture must return to start off with the defense of its national interests to find common solutions,” Meloni told the farmers in Milan.

“That is something that will change in the coming months. It doesn’t mean having a negative stance toward others, it means having a positive one for ourselves that starts off from the defense of national interests, because everyone else is doing it,” she said.

Her speech came as Italian energy giant ENI reported that Russia’s Gazprom said it could not confirm any gas deliveries Saturday via Austria. Since starting the war in Ukraine in February, Russia has cut back supplies of natural gas sent to Europe to heat homes, generate electricity and run factories.

European leaders have accused Putin of using “energy blackmail” to divide them in their strong support for Ukraine.

Meloni, who has strongly reaffirmed her support for Ukraine in the war, vowed to protect Italian industry and agriculture from the effects of rising energy prices partly induced by the conflict, as well as the residual effects of the coronavirus pandemic and a record heatwave this summer that destroyed billions in crops.

Meloni’s party, which has its roots in a neo-fascist movement, is expected to be the largest party in a center-right coalition government along with the right-wing League of Matteo Salvini and the center-right Forza Italia of ex-Premier Silvio Berlusconi.

Meloni, who would be the first woman to serve as Italy’s premier, told the farmers a key priority was to protect the “Made in Italy” agricultural brand and its supply chain to reduce dependence on imports.

Before arriving at the Coldiretti forum, Meloni called on Berlusconi at his Arcore estate outside Milan, for their first post-election meeting. A joint statement from the two parties said the meeting took place “in a climate of great collaboration and unity of intent,” especially to confront high energy prices.

Berluconi’s Forza Italia coordinator, Antonio Tajani, also took aim at the German decision and its impact on other EU countries, telling the Coldiretti forum that “If you want to be the locomotive of Europe, you can’t think about just yourself to the detriment of others.”

Salvini, for his part, addressed the Coldiretti forum on Friday and railed against the German energy package and other EU nations for not working together.

Italy has spent some 60 billion euros since last year to ease the pain of higher energy prices for households and industry. But Coldiretti has said aid farmers has been mostly in the form of tax credits and not help with electricity bills, which have gone up 500% since last year, or fertilizer costs, up 170%.

The outgoing government of Premier Mario Draghi has refused to borrow more money for a deeper aid package, citing Italy’s high debt level. Italy instead has pressed for a European price cap on Russian natural gas but so far has been unable to persuade the rest of the EU to go along. 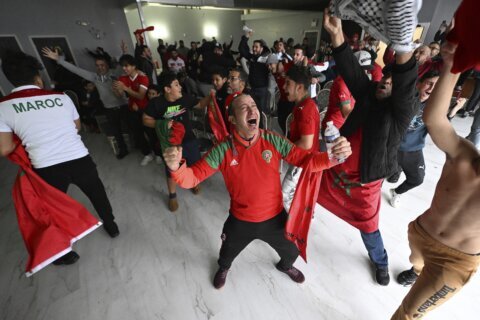