MADRID (AP) — France and Barcelona defender Jules Koundé has been substituted after apparently hurting his leg during Saturday’s Spanish league match at Valencia on Saturday.

Koundé is expected to play for France in the World Cup in Qatar where it will defend the title.

Koundé said after Barcelona’s 1-0 victory that he believed the pain was just “muscle strain.”

“We will see, but I don’t think it is anything serious,” he said before adding that the season’s compact schedule was too much for players’ fitness.

“This is the first time that we have to play every three days this early in the season,” Koundé said. “I believe that we are going a bit crazy with so many games. Sometimes those in charge don’t think about the players.”

The versatile defender went down late in the second half, touching the back of his left thigh. He walked off on his own power when replaced by Gerard Pique.

France opens its World Cup defense against Australia on Nov. 22. It also plays Denmark and Tunisia in Group D. 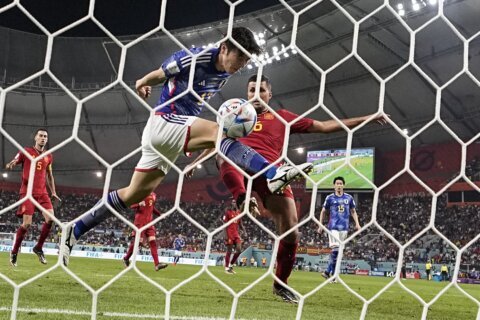