LONDON (AP) — Two London police officers were hospitalized after being stabbed in the city’s busy West End on Friday, the Metropolitan Police force said. The attack is not being treated as terrorism.

The force said officers patrolling near Leicester Square encountered a man with a knife early Friday morning and were stabbed while trying to detain him.

The officers — a man and a woman — were taken to hospital with injuries that are not life-threatening.

Police chief Mark Rowley said the female officer suffered a serious stab wound to her arm which may be life-changing, while her colleague was stabbed in the neck and chest, but should make a full recovery.

A man believed to be in his 20s was arrested on suspicion of grievous bodily harm and assaulting an emergency worker. Police said a Taser was used during the arrest and the suspect was briefly taken to a hospital as a precaution.

The incident comes as London is flooded with mourners for Queen Elizabeth II’s lying-in-state, but the stabbing did not occur near any commemorative sites and police said the injured officers were not part of the royal operation.

“These brave officers were doing their duty and assisting the public at this momentous time for our country,” he said. “My thoughts and prayers are with them, their loved ones and police colleagues following this disgraceful attack.” 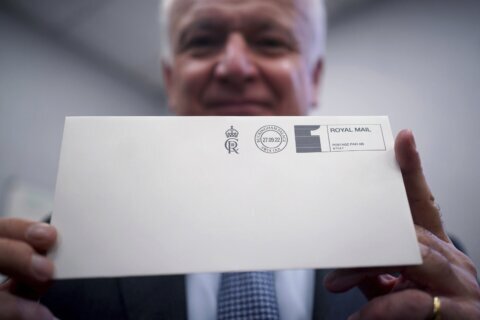