LONDON DIARY: Reflections from the queue to mourn the queen

A foreign correspondent, a consultant, a businessman, a retired accountant and his wife stand in a line for nearly eight hours.
Listen now to WTOP News WTOP.com | Alexa | Google Home | WTOP App | 103.5 FM
(1/5) 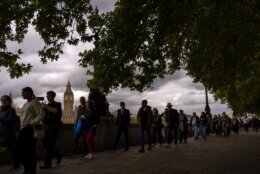 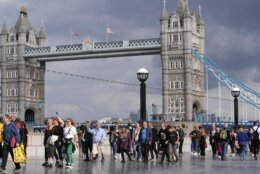 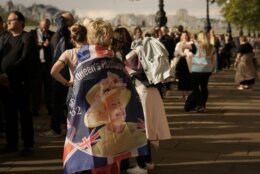 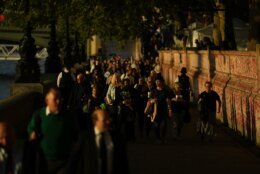 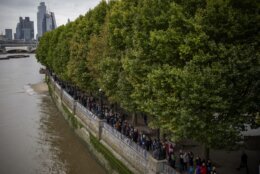 LONDON (AP) — A foreign correspondent, a consultant, a businessman, a retired accountant and his wife stand in a line for nearly eight hours.

That is how this story begins, once I claim my spot among a growing queue of mourners coming from all corners of the United Kingdom and the world to pay their last respects to Queen Elizabeth II in England’s capital.

It ends when the five of us exit the majestic hall — each in awe, in our own individual way, of the forces of change that swirl around us.

One step into the line, a volunteer named Kofi jots down my number; a wristband later confirms I am No. 3,017 in the queue.

I look back, and the chain of people has already grown by a dozen. It will stretch for miles along the south bank of the River Thames toward Westminster Hall, where the late queen is lying in state ahead of her funeral on Monday.

We were told to expect this. Long waiting times, potentially for 30 hours, in lines that could stretch more than five miles.

A single-zip backpack was all we were allowed to bring; food and drink would be tossed before entering the hall. I packed as I would for a hostile assignment: Layers and waterproofs to account for the notoriously moody weather. Protein bars and a fully charged power bank. An obscene number of pens. And good shoes.

The first challenge is finding the end of the ever-moving queue. I start from the beginning, near the Albert Embankment, and work my way through the sea of humans from all walks of life who are lined up in single file.

My fellow queuers and I assess each other silently. There is Ramakant and his wife Usha, a retired pair with a passion for mountains. Daniel, a jolly businessman from Essex, specializes in office refurbishment. There is a consultant whose identity I’ve sworn to secrecy because she was skipping work to stand in line.

In the course of our normal lives, we are unlikely to ever cross paths. But the forces of history have somehow bound us together, at least for these next few hours. Quietly, not explicitly, a sense of community has mysteriously formed between us.

We have different reasons for coming. Ramakant and Usha adored the queen. Daniel admired her dedication. For the unnamed consultant, saying goodbye to the queen was something she had to do “for myself.”

Me? I was curious. Death has been on my mind lately.

A week prior, I had been in southern Iraq to witness thousands of pilgrims make their way to the holy city of Karbala to mark the Shiite religious observance of Arbaeen — a 40-day mourning period to commemorate the death of Imam Hussein, Prophet Mohammed’s grandson.

I watched an endless procession of pious Iraqis recreate scenes from seventh-century Islam under the scorching 105-degree (40 degrees Celsius) sun. Men rode camels in Hejazi regalia and black-clad youth waved religious flags. Food stalls that dotted the many miles to the shrine gave out rice and beans.

Now I am witness to a dramatically different queue of mourners, there to mark the passing of a monarch whose 70-year reign encompassed the end of an empire. Unlike in the parched terrain of Iraq, people here are fearful it may rain.

“This is a once-in-a-lifetime experience,” Ramakant says.

Usha marvels at how Elizabeth worked up until hours before she died, handling the transition of power from Boris Johnson to Liz Truss two days before her demise.

“Imagine all the things she has done behind the scenes, in the background, none of us know anything about,” she says.

They can’t believe Elizabeth is dead, despite the fact they knew she could not live forever. “Did you notice her fingertips?” Daniel says of Elizabeth’s last appearance two days before her death. “They were see-through almost, weren’t they?”

We are silent, listening to the gentle soundtrack of the Thames.

It’s a good thing, he adds, that she died soon after Prince Philip, her husband of 74 years. It had been the same with his parents; they died within two weeks of each other. “It’s the best death, really.”

The consultant ducks to avoid a TV crew. Later she scrolls social media, hoping not to find herself on international news broadcasts. A colleague calls, and she tells them she is just “getting lunch.”

I ask: Why not just tell them you are here?

“It’s just one of those things I want to do for myself, and not have to explain.” ___

Suddenly, the line is moving. The queen’s coffin has arrived in the Hall.

Everything that follows is the epitome of order. The line snakes quickly around the bank, down to the embankment, where we watch boats cruise by. Before us, in the late-afternoon sun, the gothic complex of Westminster glimmers.

Ramakant was an accountant and has spent his retirement years traveling the world with his wife. From Niagara Falls to Mt. Kilimanjaro, they have been everywhere. “The key,” says Usha, “is not to wait until tomorrow.”

“You might be dead,” Ramakant says. To our left is the National COVID Memorial Wall, with one heart for each life lived and lost.

The consultant has to use the bathroom, but the line is now moving rapidly. So we share our location with her and, moments later, wave when we are many yards ahead and are reunited.

At the final stretch, we eye the security check just before the hall entrance. We are surprised by how fast the line has moved. A woman behind me complains to the volunteers who come to take away drinks: “I’ve got 30 hours’ worth of alcohol in here!”

Ramakant is stopped from taking off his shoes before the X-ray. “This isn’t like Gatwick!” jokes one policeman, invoking the name of one of London’s airports.

Inside the hall, all falls silent and still. We look up at the lofty wood-beam ceilings. We look down, and there it is — the queen’s coffin on a raised platform, surrounded by honor guards. On top, the imperial state crown glitters with its 3,000 diamonds.

The line divides in two, and each of us is given three seconds to pay last respects. A man in a tartan kilt and with a walking stick salutes. An elderly woman rises from her wheelchair and makes the sign of the cross. Daniel gets on one knee. Ramakant and Usha bow their heads. Then it is my turn. Outside, the sun is setting.

“We probably would never have met if it weren’t for this,” Daniel says afterward. Everyone exchanges numbers. “Even in death, she’s still doing her work.”

Ramakant turns to me. “So,” he says. “What will you write about us?”

Samya Kullab, Iraq correspondent for The Associated Press, is on assignment in London covering the death of Queen Elizabeth II. Follow her on Twitter at http://twitter.com/samya_kullab