BERLIN (AP) — Mikhail Gorbachev was enduringly popular in Germany for enabling the country’s reunification after four decades of post-World War II division — and setting the scene for the peaceful collapse of communism that made it possible.

Even 25 years after the fall of the Berlin Wall, Gorbachev was hailed with chants of “Gorby! Gorby!” as he attended a ceremony in 2014 marking the anniversary in the reunited capital.

The Cold War border that split Germany into capitalist West and communist East after World War II looked set in stone when Gorbachev came to power in the mid-1980s. But little more than five years later, the country was reunited as a member of NATO and with a pledge for the withdrawal of Soviet troops.

Gorbachev, who died on Tuesday at 91, was remembered with fondness and gratitude in Berlin, and also with a hint of wistfulness at a time when the invasion of Ukraine has driven Russia and Germany apart.

“I don’t think we were able to imagine reunification at all during the Cold War,” veteran lawmaker Wolfgang Schaeuble, the West German interior minister at the time and one of the main negotiators of the country’s unity, told ARD television. “And that it then happened — in peace and freedom, without a drop of blood, couldn’t have been imagined without Gorbachev.”

Former Chancellor Angela Merkel, who grew up in East Germany and worked as a scientist there, said that “Mikhail Gorbachev radically changed my life as well — I will never forget that.”

Soon after taking power in Moscow, Gorbachev had started the process of reform and increasing openness. Without that, Merkel said, “the peaceful revolution in East Germany would not have been possible.”

In 1989, pressure for change mounted in the communist countries of eastern Europe — including East Germany, whose long-serving hardline leadership had little appetite for reform.

Visiting East Berlin for the country’s 40th anniversary celebrations in October 1989, amid protests by demonstrators chanting “Gorby, help us,” Gorbachev is said to have warned its leaders that “life punishes those who come too late.” Whether he actually said those words is a matter of contention, but they did sum up his message.

Merkel said she could still recall the fear that she and others felt at the time of a military crackdown.

“But this time … no tanks rolled, there were no shots,” she said. “Instead, Mikhail Gorbachev reproached the aging East German leadership with the sentence: ‘Life punishes those who come too late.’”

Just over a month later, under pressure from ever-larger demonstrations, the East German government opened the highly fortified border that had stopped most of the country’s population from traveling to the West.

In an interview with Germany’s Stern magazine in 2013, Gorbachev said he wasn’t woken up with news of the fall of the Wall — a pivotal moment in the collapse of communism in the Soviet-dominated eastern bloc — “and it wasn’t necessary.”

“Our position was clear from the beginning,” he said. “We knew that Europe can’t live with a divided Germany, with a time bomb. I understood that Russians and Germans have to reconcile.”

“We were convinced that the reunification of the Germans was in everyone’s interest — even if Britain and France initially stood against it,” he added.

Gorbachev, who recalled growing up amid the horrors of Nazi Germany’s invasion of the Soviet Union, said that he had forgiven the Germans.

The road from the fall of the Berlin Wall to German reunification just under 11 months later was stunningly swift. Gorbachev and his rapport with then-West German Chancellor Helmut Kohl were given much of the credit.

In February 1990, Kohl said during a visit to Moscow that Gorbachev had “pledged unambiguously that the Soviet Union will respect the Germans’ decision to live in one state, and that it is a matter for the Germans to determine the timing of and path to unification.”

In July, Kohl visited Gorbachev’s home region in southern Russia, returning with an agreement from Gorbachev to allow a united Germany to remain in the NATO military alliance and for a full withdrawal of Soviet troops from the east by 1994.

The two leaders’ informal “cardigan diplomacy” contrasts sharply with the current state of German-Russian relations, which are in deep freeze after Russian President Vladimir Putin’s invasion of Ukraine.

Gorbachev, Vice Chancellor Robert Habeck said, “also stands for how relations between Russia and Europe could have developed.”

The German parliament said it will honor Gorbachev next Wednesday, holding a minute of silence and lowering the flags at the Reichstag building in Berlin to half-staff. 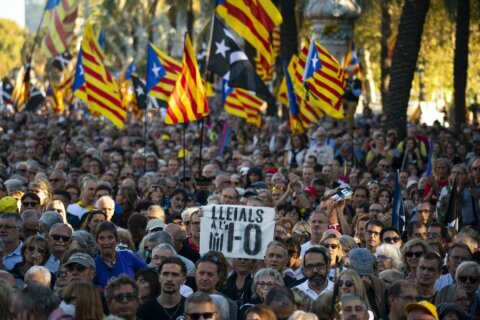