LONDON (AP) — Meghan, the Duchess of Sussex, says that “just by existing,” she and her husband Prince Harry “upset the dynamic of the hierarchy” when they were in the U.K.

The former actress made headlines in Britain on Tuesday with comments made during an interview with U.S. magazine The Cut. In the interview published Monday, the duchess said it’s not easy to “forgive” when asked if there was room for forgiveness between her, Britain’s royal family and her own family. She also referred to Harry’s strained ties with his father, Prince Charles.

“I think forgiveness is really important. It takes a lot more energy to not forgive,” she said. “But it takes a lot of effort to forgive. I’ve really made an active effort, especially knowing that I can say anything.”

Meghan, 41, and Harry, 37, have been in a tense relationship with Britain’s royal family since they stepped away from royal duties and left the U.K. in early 2020, citing what they said were the unbearable intrusions and racist attitudes of the British media.

Since their move to California, where they are now settled with their two young children, they have publicly discussed their unhappiness with the royal family. In a bombshell interview with Oprah Winfrey last year, Meghan spoke about racism within the monarchy and Harry said Charles had stopped taking his calls.

Asked about Meghan’s privacy lawsuit against a British tabloid, The Cut — part of New York Magazine — said the duchess spoke about the terrible impact of “toxic tabloid culture” on both her and Harry’s families.

“Harry said to me, ‘I lost my dad in this process.’ It doesn’t have to be the same for them as it was for me, but that’s his decision,” she told the magazine.

A spokeswoman for Meghan later clarified that the duchess was referring to losing her own estranged father, Thomas Markle, and saying that she hopes this does not happen to Harry and his father.

The couple have signed deals with Spotify and Netflix, and the first offering, a podcast featuring Meghan as a host in conversation with celebrities, has just launched. 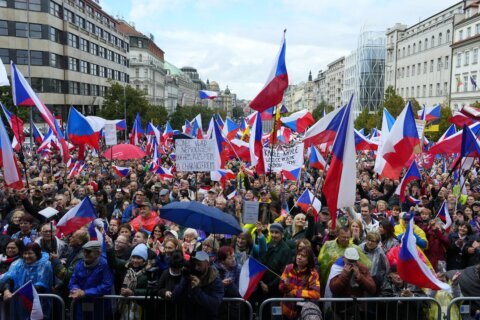