ROME (AP) — A judge in Italy on Monday ordered an Italian man to remain in jail as an investigation continues into the death of a Nigerian street vendor whose brutal beating at the hands of the suspect shocked many in Italy and prompted strong condemnation from the Nigerian government.

Police took Filippo Claudio Giuseppe Ferlazzo, 32, into custody on July 29, minutes after the vendor was beaten and left for dead on a busy shopping street in the beach town of Civitanova Marche as bystanders watched, including at least two who filmed the attack.

An autopsy this week will determine the exact cause of death for Alika Ogorchukwu, 39. Widely circulated videos showed the suspect on top of Ogorchukwu, pummeling him with his bare hands after first striking him with the victim’s own crutch.

Judge Claudio Bonifazi presided over a hearing for Ferlazzo at a jail near the Adriatic coastal city of Ancona.

Ferlazzo “gave his version of the facts and said he was sorry,” defense lawyer Roberta Bizzarri told reporters. She added that Ferlazzo, who is white, said “there was no racial element” involved.

Pressed if Ferlazzo was saying he was sorry to the victim’s family, the lawyer replied, ‘’yes, to the family.”

Ferlazzo could face charges of murder and robbery because Ogorchukwu’s cell phone was taken.

“Ferlazzo’s ‘sorrys’ aren’t enough, now only justice is needed and not vendetta,” Orgochukwu’s family said in a statement issued through their lawyer. “It’s difficult to understand what happened.”

The family’s lawyer, Francesco Mantella, added in a phone call that the widow, Charity Oriachi, wants to see the suspect “face to face” to try to understand why he killed her husband.

Meanwhile, the Nigerian government demanded Italy swiftly “bring the perpetrator of the heinous act” to justice.

A Nigerian foreign ministry statement released Sunday said the government “strongly condemns the gruesome murder of a Nigerian” and calls on all Nigerians “to exercise restraint as the Law takes its course.” The country’s embassy in Rome has been instructed to “work speedily, together with the relevant Italian authorities, to ensure that justice is served, in order to forestall a repeat of the unfortunate incident.”

Some members of the Nigerian immigrant community in the Marche region that includes the area where Orgochukwu lived and worked protested the slaying on Saturday. Another protest is expected later this week.

Police investigator Matteo Luconi has told reporters that suspect attacked the vendor after Ogorchukwu’s “insistent” requests to him and his female companion for pocket change.

The slain man’s lawyer said he was attacked after complimenting the woman’s beauty. The companion, identified only as Elena D., was quoted by Corriere della Sera daily as saying Orgochukwu had touched her arm, but that didn’t particularly bother her. The woman said she was in a clothing store when the attack occurred shortly after.

The attack comes during campaigning for Sept. 25 elections in Italy. The anti-migrant head of the League party, Matteo Salvini, has made immigration as well as protecting citizens from violent crime top issues.

Orgochukwu was using a crutch after being struck by a car while riding a bicycle. Mantella had been engaged to obtain accident compensation to help the family, including an 8-year-old son, who, the lawyer said, hasn’t been yet told what happened to his father. 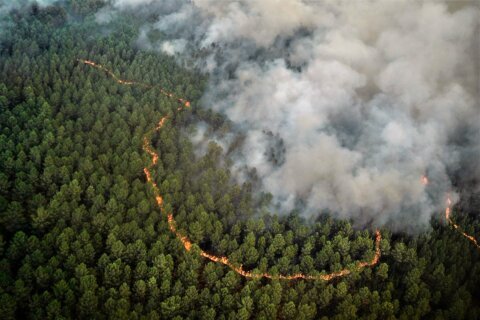