COPENHAGEN, Denmark (AP) — Denmark will increase its planned offshore wind capacity in the Baltic Sea to 3 gigawatts and hook it up to the German grid, a step toward weaning Europe off its reliance on Russian gas. When established in 2030, it should be able to supply electricity to up 4.5 million European homes.

A 470-kilometer (292-mile) undersea cable will run via the Danish Baltic Sea island of Bornholm to northern Germany, enabling the power to be sent directly to the German electricity grid and on to the rest of Europe.

At present, Denmark and Germany have respective offshore wind energy capacities of 1.5 gigawatts and 1 gigawatt.

German Economy and Climate Minister Robert Habeck called it “a flagship project” and added that “with such projects among European partners, we achieve two key goals at the same time: European energy security and climate neutrality.” The deal was announced Monday in Copenhagen.

Denmark’s energy minister, Dan Jørgensen, added that “international cooperation is more urgent than ever before” to further reduce greenhouse gas emissions and to make Europe independent from Russian gas and oil.”

On Friday, Germany’s foreign minister said estimates show that wind from the Baltic Sea can produce “more than twice the installed capacity of all German coal-fired power stations.” The countries around the Baltic Sea “need to set the sails, work together and set course towards making our region more sustainable, more resilient and more secure,” Annalena Baerbock said.

German Chancellor Olaf Scholz has said Germany remains committed to ending its greenhouse gas emissions by 2045, the earliest of any major industrialized nation. To meet the goal, his government has said it will close coal-fired power plants that were reactivated due to the war in Ukraine, end imports of Russian oil and coal this year and aim to stop using Russian gas within the next two years.

Monday’s announcement comes a day before a meeting in Copenhagen to discuss ways “to make the Baltic Sea region free of Russian energy and at the same time pave the way for a significant green transition,” according to the Danish government.

Those expected to attend include the president of the European Union’s executive commission, Lithuania’s president, the prime ministers of Poland, Latvia, Estonia, Finland and Denmark, and several energy ministers. ___ This story has been corrected to show that the German minister was not visiting Copenhagen. 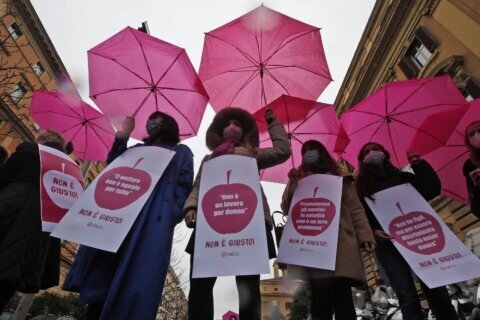