The suspension applies to new bookings for domestic U.K. and European destinations departing from Heathrow, Britain’s busiest airport. British Airways said the move applies to short-haul flights only, generally defined as up to three hours, which would rule out cities such as Manchester, Paris, Berlin, Madrid and Zurich.

The airline initially said the freeze would cover flights until Monday but later extended it for a week. Flights from Heathrow to U.K. and European cities were only available starting on Aug. 16, according to searches on the British Airways website. Passengers, however, can still book short-haul flights to the airport.

The airline said it was taking action after Heathrow capped daily departing passenger numbers at 100,000 until Sept. 11. The airport asked airlines to stop selling tickets and cut flights, stirring criticism.

Passenger traffic at European airports has boomed after two years of pandemic travel restrictions, but airports and airlines haven’t been able to keep up because they laid off many thousands of staff amid the depths of COVID-19. Heathrow and Schiphol have been among the hardest hit.

“As a result of Heathrow’s request to limit new bookings, we’ve decided to take responsible action and limit the available fares on some Heathrow services to help maximize rebooking options for existing customers, given the restrictions imposed on us and the ongoing challenges facing the entire aviation industry,” British Airways said in a press statement.

The airline said it was “dynamically managing the situation,” including halting sales on some dates so it didn’t exceed the cap.

Heathrow has been the frequent scene of travel mayhem this summer, with long lines for security and technical glitches with the baggage system that resulted in huge piles of lost and unclaimed luggage.

The airport apologized last month to passengers whose travels were disrupted and said service levels had been unacceptable.

In Amsterdam, Schiphol said that after consulting with airlines, daily departing passengers will be capped at 67,500 in September and 69,500 in October. The caps would help the airport cope with “operational changes,” such as delayed arriving or departing flights.

The number is lower than August’s 73,000 daily cap because of the “seasonal effect” in the fall.

“Travelers use more bins at security control after the summer because they wear more clothes, such as coats, hiking boots and vests,” the airport said on its website. “As a result, it takes a little longer to check all the hand baggage and the passengers.”

Schiphol also plans to hire 280 more security staff by October, saying “virtually all parties at the airport are understaffed,” which means any unexpected changes could result in a cascade of delays to the “entire airport process.” 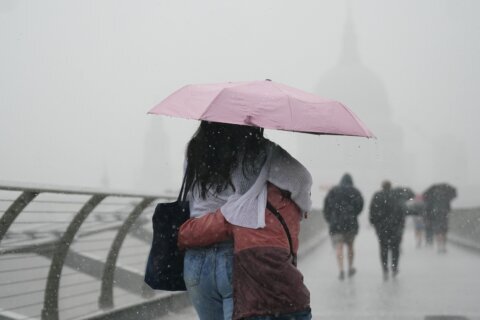