MOSCOW (AP) — A court in Russia’s far east on Friday handed a rare acquittal to a feminist artist who was charged with disseminating pornography after she shared artwork online depicting female bodies.

The charges against activist Yulia Tsvetkova, 29, in the far eastern city of Komsomolsk-on-Amur had elicited international outrage, with human rights groups linking her prosecution to the Kremlin’s aggressive promotion of “traditional family values.” Russia’s most prominent women’s rights groups have faced crackdown in recent years.

In a 15-month trial that went on behind closed doors, the prosecution had sought a prison sentence of three years and two months on the charges of disseminating pornography. The charges are reportedly related to Tsvetkova’s group on the popular Russian social media network VKontakte, where stylized drawings of vaginas were posted. Tsvetkova is not allowed to disclose details of the criminal case against her.

The judge acquitted the artist on Friday.

“We’re glad, but not completely,” Tsvetkova’s mother, Anna Khodyreva, wrote on Facebook after the ruling was announced, adding that the prosecution still has 10 days to appeal the verdict.

An acquittal in a criminal case is a rare occurrence in Russia. According to Russia’s Investigative Committee, less than 1% of defendants in criminal cases were acquitted by courts last year.

Tsvetkova ran a children’s theater and was a vocal advocate of feminism and LGBT rights. She founded an online group called Vagina Monologues that encouraged followers to fight the stigma and taboos surrounding the female body, and posted other people’s art in it.

She was detained in November 2019 and spent the next four months under house arrest. Her home was raided, along with her mother’s education studio for children. The activist was fined twice for violating Russia’s law against disseminating gay “propaganda” to minors and has been declared a “foreign agent” — a designation with strong pejorative connotations that implies additional government scrutiny and aims to discredit the recipient.

Tsvetkova has maintained her innocence. Khodyreva, her outspoken mother, told The Associated Press last year that “Yulia has always been against pornography. … Feminists are against pornography because it’s exploitation of women’s bodies.”

The case against Tsvetkova took a severe toll on her and her family. Khodyreva said that, on top of pressure from the authorities, she and her daughter have received death threats and were repeatedly harassed by strangers. Khodyreva’s education studio for children has lost many clients. Tsvetkova’s children’s theater, Merak, no longer exists — frequent visits from law enforcement were too distressing for the children so it shut down.

In a rare interview last month, a distraught Tsvetkova said that “my life has been destroyed completely.” “It’s not a metaphor, it’s reality,” she told British broadcaster the BBC.

Many public figures have spoken out in Tsvetkova’s support. Activists all across Russia have protested her prosecution, artists dedicated performances to her and an online petition demanding that the charges be dropped gathered over 250,000 signatures. 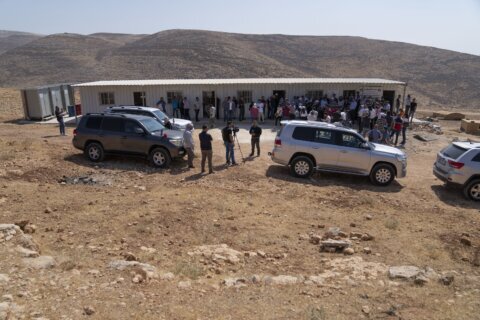