NICOSIA, Cyprus (AP) — A plan to develop a sizeable natural gas field off Cyprus that could help the European Union find alternative energy sources to Russia will be ready by the end of the year, the east Mediterranean island nation’s energy minister said Thursday.

Energy Minister Natasa Pilides said another well is expected to be drilled at the Aphrodite field in the next few months and will be used to gather additional information about the deposit’s size and to extract gas at a later stage.

Initially discovered in 2011, the Aphrodite field is estimated to hold up to 4.4 trillion cubic feet of gas. Chevron, along with partners Dutch Shell and Israeli NewMed Energy, now own the drilling rights to the field.

Aphrodite sits close to the massive Leviathan gas field, which is also jointly operated by Chevron and NewMed.

“You know how important Cyprus is to Chevron and the eastern Mediterranean region,” Clay, Neff, the president of Chevron’s Middle East, Africa and South America division, told reporters after talks with the Cypriot minister. “We believe that this project again will provide very important natural gas supply to the region and the world.”

Pilides said the original six options on how best to develop the field have been whittled down to four. Although details are sparse because of non-disclosure agreements, Pilides said the options include processing the gas at plants in Idku, Egypt, or elsewhere for export.

The selected development plan will determine the actual timeline for getting the gas to markets, Pilides said.

The minister said Moscow’s invasion of Ukraine had provided an extra impetus to the search for alternative sources of energy.

Prospects for the Aphrodite field as well as other gas deposits discovered off Cyprus received a boost after the European Union confirmed that natural gas could act as a bridge fuel until 2050 as part of the bloc’s transition to cleaner energy.

The EU’s outlook gives energy companies a more “reliable timeframe so they know that the project is definitely viable,” Pilides said.

“That’s the feedback that we’ve had, that there is definite, a definite view in favor of the viability of the project, which is a big step forward. And for that reason, yes, there is a sort of willingness to expedite,” he said.

ExxonMobil and partner Qatar Energy, as well as a consortium made up of France’s Total and Italy’s Eni, together hold drilling rights in eight of the 13 blocks that make up Cyprus’ offshore economic zone. 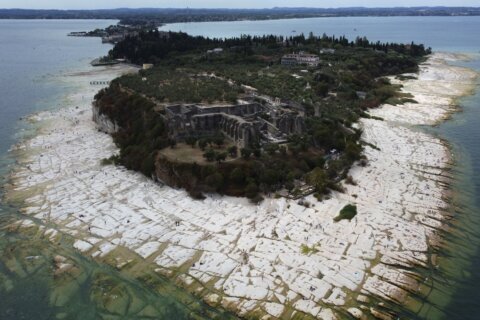