BRUSSELS (AP) — The British government appears to have no political will to resolve its festering trade dispute with the…
Listen now to WTOP News WTOP.com | Alexa | Google Home | WTOP App | 103.5 FM

BRUSSELS (AP) — The British government appears to have no political will to resolve its festering trade dispute with the European Union and risks endangering the hard-won peace in Northern Ireland, Irish Prime Minister Micheal Martin said Wednesday.

Prime Minister Boris Johnson’s government said last month that it it would pass a law to scrap parts of a trade treaty with the EU signed less than two years ago. The EU has threatened to retaliate, raising the specter of a trade war between the two major economic partners.

“I just simply do not detect a sustained political will on behalf of the U.K. government to settle this, to resolve this, because it without question can be resolved,” Martin told EU lawmakers in Strasbourg, France.

The British government is expected to publish a draft law in the coming days to remove checks on goods entering Northern Ireland from the rest of the U.K. But there are concerns from legal experts that the move is unlawful, and the bill will face opposition in Parliament.

Britain says its unilateral move to breach the legally binding Brexit treaty is an insurance policy in case it can’t reach an agreement with the 27-nation bloc to end their dispute over trade rules.

Martin said that instead of the British government trying to help fix things, “we have actually seen efforts to block agreements and introduce new problems.”

British unionists in Northern Ireland — the only part of the U.K. that shares a border with an EU member state, Martin’s Ireland — oppose the trade rules, which created a customs border in the Irish Sea.

When Britain left the European Union and its borderless free-trade zone, the two sides agreed to keep the Irish land border free of customs posts and other checks because an open border is a key pillar of the peace process that ended decades of violence in Northern Ireland.

Britain’s Conservative government insists the rules also are undermining peace in Northern Ireland, where they have caused a political crisis. The main unionist party is blocking the formation of a power-sharing government in Belfast, saying it won’t take part until the trade rules are scrapped.

Ireland’s prime minister told the European Parliament on Wednesday that the British government’s plans “to set aside a solemn agreement would be deeply damaging,”

“It would mark a historic low point signaling a disregard for essential principles of laws which are the foundations of international relations,” Martin said. “And it would quite literally be for the benefit of absolutely no one.” 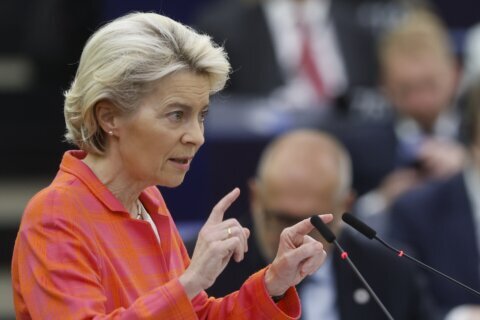