ANKARA, Turkey (AP) — The foreign ministers of Ireland, Norway and Turkey say aid deliveries from Turkey to rebel-held northwest Syria must continue, warning Wednesday of a humanitarian crisis if the only remaining border gate is closed.

Russia’s deputy U.N. ambassador has told the U.N. Security Council that Moscow sees no reason to continue humanitarian aid deliveries through the Bab al-Hawa border gate. He accused the West and the United Nations of insufficient efforts to deliver such aid from Damascus, the Syrian capital. The U.N. Security Council is scheduled to vote July 10 on whether to continue authorizing cross-border aid from Turkey.

Ireland and Norway, two non-permanent members of the U.N. Security Council, have been working together to keep the Bab al-Hawa crossing open. Their foreign ministers visited the border area on Wednesday before holding talks with Turkish Foreign Minister Mevlut Cavusoglu in Ankara.

Norwegian Foreign Minister Anniken Huitfeldt told reporters during a joint news conference that 4 million Syrians were in need of the humanitarian aid that passes through the border, warning that the situation in Syria was going from “bad to worse.”

Cavusoglu said he discussed the aid deliveries with Russian Foreign Minister Sergey Lavrov during their talks in Ankara last week.

“We will continue our efforts to persuade the Russian side in the coming period,” he said.

In early July 2020, China and Russia vetoed a U.N. resolution that would have maintained two border crossing points from Turkey to deliver humanitarian aid to Syria’s Idlib province. Days later, the council authorized the delivery of aid through just one of those crossings, Bab al-Hawa. That one-year mandate was extended for a year on July 9, 2021. 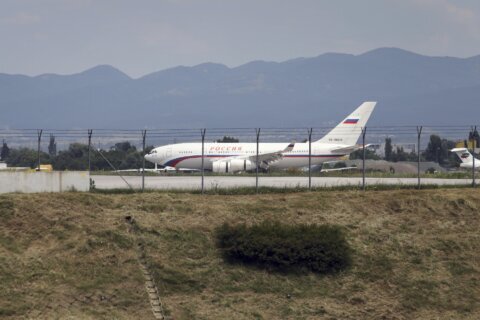