France to give queen Republican Guard horse for her jubilee

PARIS (AP) — French President Emmanuel Macron on Wednesday said his country would make a present of a horse to Queen Elizabeth II, to mark the celebrations of her 70 years on the throne.

The Elysee said Macron decided to give the queen, a known horse lover, a 7-year-old grey gelding belonging to the largely ceremonial French Republican Guard named Fabuleu de Maucour. It was to be delivered to Windsor Castle Wednesday.

The horse was trained to carry the standard-bearer of the Guard. It paraded on Paris’ Champs-Elysees avenue on May 8, ahead of the presidential cortege, for the ceremony marking the anniversary of the victory of the Allied forces over Nazi Germany in World War II.

Macron will pay a formal homage to the queen on Thursday during a flame rekindling ceremony at the Arc de Triomphe monument. He will lay a wreath at the Tomb of the Unknown Soldier, in the presence of British Ambassador to France Menna Rawlings. Both the British and the French national anthems will be played, the Elysee said.

From Thursday to Sunday, the United Kingdom and Commonwealth nations are celebrating Elizabeth’s 70 years on the throne, an anniversary known as her Platinum Jubilee.

Elizabeth, then 25, became queen on Feb. 6, 1952, following the death of her father, King George VI. Her formal coronation took place on June 2, 1953, in Westminster Abbey, but her reign began the moment her father died.

Now 96, she is Britain’s longest-reigning monarch and the first to reach seven decades on the throne. 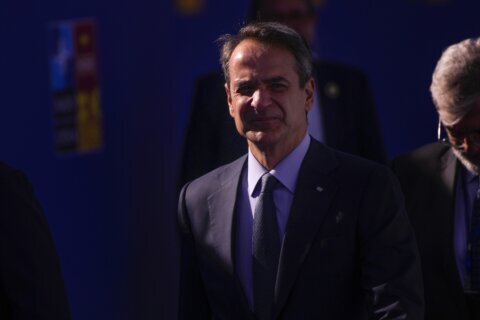