BERLIN (AP) — Authorities in Austria say more than 100 students and teachers on a school trip from Germany had to be airlifted to safety after they followed an online map that directed them onto an unmarked and difficult trail.

Police in the western state of Vorarlberg said more than 60 rescuers — including the local mayor —took part in the rescue late Tuesday.

Police said in a statement Wednesday that the group from Ludwigshafen, Germany, became stuck on a ridge leading up to Walmendingerhorn summit after a teacher had found what was described as a “classic evening walk” using an internet search tool.

In fact, the route was partly suspended and involved sections that required climbing, firm shoes and Alpine experience, police said.

Due to slippery conditions and the fact that “not all students were wearing optimal footwear” one teacher decided to turn back. After two students slipped and suffered minor injuries, the teacher dialed emergency services, prompting the rescue operation.

Police said the 99 students — ages 12 to 14 — and eight teachers were plucked from the ridge by helicopter using ropes.

“Several students were exhausted, chilled, wet and completely distraught,” the statement said, adding that a crisis intervention team was brought in to help. 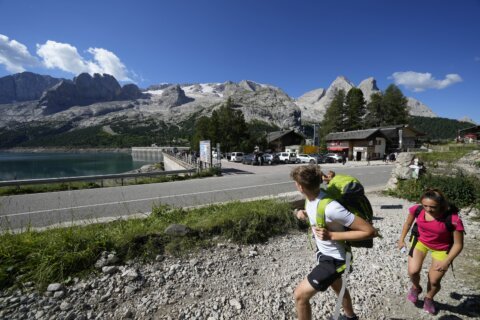