LONDON (AP) — The owner of a rural English pub says he was asked to change the bar’s name by a fashion magazine because of the village where it’s located: Vogue.

Mark Graham, who runs the Star Inn at Vogue, said he received a letter from British Vogue publisher Conde Nast, saying the name could “cause problems” because members of the public might confuse the two businesses.

He said the letter from Sabine Vandenbroucke, chief operating officer of Conde Nast Britain, asked if he would change the name, adding: “Please reply within seven days or we will take remedial action.”

“There’s always too much a case of the big boys trying to stomp on the little boys, and as soon as I realized what they were trying to do, I went ‘you’re not having me, my handsome,’” he told broadcaster ITV.

He sent a reply noting that the village, in Cornwall county about 250 miles (400 kilometers) southwest of London, is considerably older than the magazine, whose British edition was founded in 1916.

“I presume that at the time when you chose the name Vogue … you didn’t seek permission from the villagers of the real Vogue,” he wrote.

“In answer to your question whether we would change our name, it is a categorical NO.”

Graham said that on Friday he received another letter from Conde Nast saying that it regularly monitors use of the name Vogue but acknowledging that “we did not need to send such a letter on this occasion.” 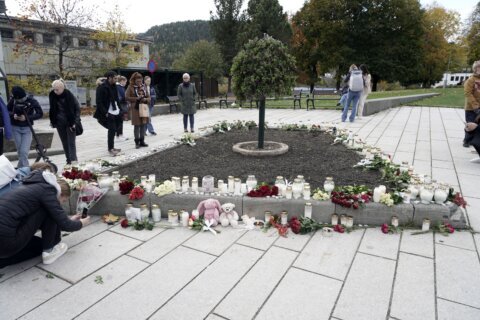