DAVOS, Switzerland (AP) — Kremlin critic Bill Browder wants governments to step up efforts to get to the riches squirreled away by Russian oligarchs and linked to President Vladimir Putin by forcing the accountants, lawyers and others who set up murky legal and financial structures to become whistleblowers.

Browder, author of the nonfiction best-seller “Freezing Order: “A True Story of Money Laundering, Murder and Surviving Vladimir Putin’s Wrath,” says Russia’s war in Ukraine has increased attention on how oligarchs are custodians of the Russian leader’s wealth.

“But the oligarchs are not naïve,” Browder told The Associated Press on Tuesday at the annual World Economic Forum meeting in Davos. “They’ve hired the best lawyers, best asset protection specialists, and there are shell companies and trust companies and offshore companies and nominees and proxies — and the whole thing is extremely well thought-through.”

The founder of Hermitage Capital, an early investor in post-Soviet Russia, Browder raised the alarm after his Russian tax adviser, Sergei Magnitsky, died in a Russian prison in 2009. He has become arguably one of the world’s biggest critics of Putin ever since.

Speaking to the AP in Davos, Lithuanian President Gitanas Nauseda — a sharp critic of Moscow’s campaign in Ukraine — acknowledged it’s not easy to follow the “dark and dirty money” of Russian oligarchs.

“But we have to do this: To investigate and of course to freeze the assets as much as possible, and then afterward to find a legal framework to use them for restructuring or recovery or just rebuilding of Ukraine after the war,” he said.

“We did some partial steps, but this is not sufficient enough, and we have to exclude — or de-SWIFT — more Russian banks. Then probably we could expect that Russian society will start to feel the pain,” he said, alluding to reports of support in Russia for Putin’s war in Ukraine.

Browder credited Biden administration efforts to put a squeeze on Putin and his government since the war began by putting a freeze on assets of Russia’s central bank, chasing the oligarchs, halting exports of technology to Russia and supplying weapons to Ukraine.

But when it comes to getting Russian oligarchs’ money, “we’re only scratching the surface,” Browder said.

Browder says their money is held in top banks in places like London, New York and Zurich as well as in real estate, hedge funds and private equity funds:.

“It’s right in front of our eyes and the amounts are unbelievably big,” he said. “I estimate that since Vladimir Putin took power, he and the 1,000 people around him have stolen $1 trillion from the Russian state. And that money is stored in our financial capitals.”

He acknowledged that what he sees as the solution is “quite radical” — forcing “the people who set up these structures, the enablers, the lawyers, the accountants, the trustees under law to become whistleblowers for the government.”

“In other words, put an amendment into all money laundering and all sanctions law to say that people who are involved in setting up structures for sanctioned individuals have to come forward with the information to the government — or face a punishment of fines and imprisonment,” Browder said.

Jacques Attali, a former top French government official and past president of the European Bank for Reconstruction and Development, expressed hesitation about Browder’s idea.

To begin with, “it must be said that a lawyer shouldn’t do anything illegal — and that would be enough,” said Attali, an eminence grise at Davos. “A lawyer is necessarily at the service of his or her client.”

“You can strengthen legislation. You can’t ask a lawyer to turn in his or her client,” he said.

Vitaly Klitschko, mayor of the Ukrainian capital of Kyiv, supported the idea of further cracking down on Russian oligarchs’ money, saying, “I think we have to use every leverage to stop the aggression, and it’s not a secret that the Russians use the money for (Putin’s) army.” 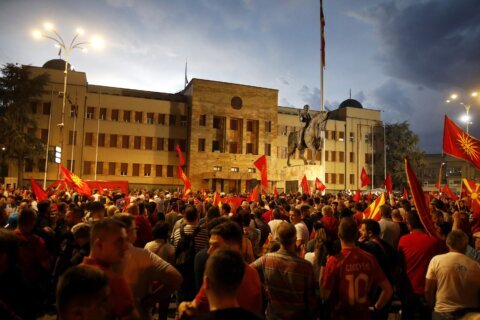