Queen Elizabeth II, who has been experiencing mobility problems, did not attend the service at St. George’s Chapel on the castle grounds, a fixture in the royals’ calendar.

William and Kate, also known as the Duke and Duchess of Cambridge, were accompanied by two of their three children: Prince George, 8, and 6-year-old Princess Charlotte.

Also in attendance were the queen’s youngest son, Prince Edward, with his wife Sophie and their children, and Princess Eugenie, the daughter of Prince Andrew.

The queen, who turns 96 on Thursday, is celebrating her Platinum Jubilee this year, marking 70 years on the throne.

She cut back on public duties on her doctors’ orders since spending a night in hospital in October, and also had a bout of COVID-19 in February. She attended a memorial service last month for her late husband Prince Philip, and has continued to meet virtually with diplomats and politicians.

On Thursday she had a visit from her grandson Prince Harry and his wife Meghan — the first time the couple has visited the U.K. together since they stepped down as working royals in 2020 and moved to California.

Harry and Meghan visited the queen at Windsor, 20 miles (32 kilometers) west of London, on their way to the Netherlands for the Invictus Games. Harry is founder and patron of the international sports competition for wounded or ill military personnel and veterans. 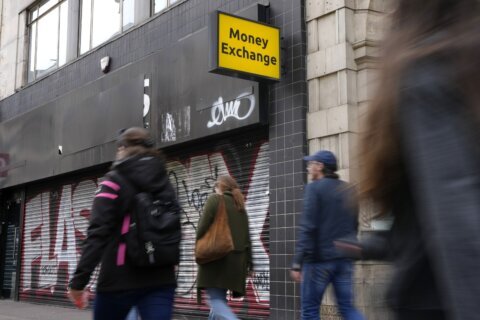