BUDAPEST, Hungary (AP) — As Hungary’s nationalist Prime Minister Viktor Orban prepares to continue his autocratic governance of Hungary for another four years, he faces a shattered opposition at home but an increasingly isolated position abroad, where his flouting of democratic standards and approach to the war in Ukraine has riled the European Union and other nations.

On Sunday, as officials from his right-wing Fidesz party gathered at an election night event on the Danube river in Budapest, Orban told supporters that their landslide victory in the country’s national election was a message to Europe that his model of “illiberal democracy” was a prophecy for the continent’s future.

“The whole world has seen tonight in Budapest that Christian democratic politics, conservative civic politics and patriotic politics have won. We are telling Europe that this is not the past, this is the future, our common European future,” Orban said.

But while Orban’s party won 53% of the vote in Hungary, convincing Europe to get on board won’t be so easy. Orban already faces heavy pressure in the EU to change tack on his approach to corruption, minority rights and media freedom, and as war rages in neighboring Ukraine, his ties to Russian President Vladimir Putin have alienated even some of his closest allies.

During Hungary’s election campaign, a Western-looking coalition of opposition parties challenging Orban called for Hungary to support its embattled neighbor and act in lockstep with its EU and NATO partners.

Yet Orban, considered to be Putin’s closest ally in the EU, insisted that Hungary remain neutral and maintain its close economic ties with Moscow, including continuing to import Russian gas and oil on favorable terms.

The president of Ukraine, Volodymyr Zelenskyy, on Saturday depicted the Hungarian leader as out of touch with the rest of Europe, which has united to condemn Putin, support sanctions against Russia and send aid including weapons to Ukraine.

“He is virtually the only one in Europe to openly support Mr. Putin,” Zelenskyy said.

Yet while speaking to supporters on Sunday, Orban singled out Zelenskyy as part of the “overwhelming force” that he said his party had struggled against in the election — “the left at home, the international left, the Brussels bureaucrats, the Soros empire with all its money, the international mainstream media, and in the end, even the Ukrainian president.”

Orban’s antagonistic approach to Zelenskyy and conspicuous caution around damaging relations with Russia, even as Moscow is accused of committing war crimes in Ukraine, has led to fault lines appearing among his European friends.

Poland, also governed by a right-wing populist government, is Hungary’s most loyal partner in the EU. But speaking to Polish public radio in the week before Hungary’s vote, ruling party leader and Orban ally Jaroslaw Kaczynski said he was displeased with Orban’s stance on Russia.

“We will see what will happen after the elections and then this assessment can be finally formulated. But we are not happy,” Kaczynski said.

Hungary’s vote had been expected to be the closest since Orban took power in 2010, thanks to the country’s six main opposition parties putting aside their ideological differences to form a united front against Fidesz.

But with 99% of votes counted in the election for the country’s 199-seat parliament, Fidesz held 53% of the vote while the opposition coalition, steeply underperforming expectations, had 35%.

Edit Zgut, a political scientist at the Polish Academy of Sciences in Warsaw, predicted that the clear victory for Orban would allow him to move further in an autocratic direction, sidelining dissidents and capturing new areas of the economy.

“Hungary seems to have reached a point of no return,” she said. “The key lesson is that the playing field is tilted so much that it became almost impossible to replace Fidesz in elections.”

Orban — a fierce critic of immigration, LGBTQ rights and “EU bureaucrats” — has garnered the admiration of right-wing nationalists across Europe and North America.

Along with the parliamentary election, a referendum on LGBTQ issues was held on Sunday with questions pertaining to sex education programs in schools and the availability to children of information about sex reassignment. Participation failed to reach the 50% threshold to make it legally binding, with 20% of voters spoiling their ballots, part of an opposition initiative to sabotage the referendum which it decried as homophobic. Of the 44% of voters who cast valid votes, more than 92% voted with the government’s position

In a surprise performance, radical right-wing party Our Homeland Movement appeared to have garnered more than 6% of the vote, exceeding the 5% threshold needed to gain seats in parliament.

Speaking to supporters in Budapest late Sunday, opposition leader Peter Marki-Zay conceded defeat but argued that Fidesz had won under a system of its own making.

“We knew in advance that it would be an extremely unequal fight,” Marki-Zay said. “We do not dispute that Fidesz won this election. That this election was democratic and free is, of course, something we continue to dispute.” 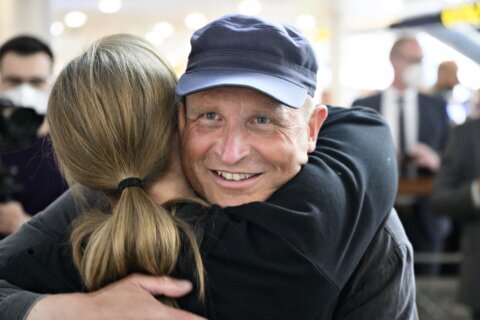