Both she and rival Emmanuel Macron, the frontrunner in polls as he seeks a second term as president, face a tightly contested April 24 runoff. They both were confronted by women in headscarves who asked why their clothing choices should be caught up in politics.

Macron wouldn’t ban religious clothing, but he has overseen the closure of numerous mosques, schools and Islamic groups, with help from a special team to root out suspected breeding grounds for radicalism. The Macron government also passed a controversial law last year to fight “separatism,” the word used to describe the mixing of politics with Islam, deemed dangerous to France’s prized value of secularism.

Now, some Muslims feel the presidential campaign is once again stigmatizing their faith.

At a farmers’ market in the southern town of Pertuis, a woman in a blue-and-white head covering approached Le Pen as the candidate weaved past fishmongers and vendors to greet supporters.

“What is the headscarf doing in politics?” the woman asked.

Le Pen defended her position, calling the headscarf a “uniform imposed over time by people who have a radical vision of Islam.”

“That’s not true,” countered the woman. “I started to wear the veil when I was an older woman … For me it is a sign of being a grandmother.” The woman noted that her father had served in the French military for 15 years.

Le Pen’s platform calls for banning Islamic headscarves in French streets, a giant step further than two laws already in place, a 2004 ban on headscarves in classrooms and a 2010 ban on the face-covering niqab in streets. Headscarves are common apparel for many Muslim women.

Her opposition to the headscarf has encapsulated what her critics say makes her dangerous to French unity, by alienating millions of French Muslims. Le Pen would also slash immigration and wants to outlaw ritual slaughter, which would restrict French Muslims’ and Jews’ access to kosher and halal meat.

Macron, too, debated a woman in a Muslim headscarf on Friday in a lively exchange on broadcaster France-Info. He sought to distance himself from Le Pen by saying he would not change any laws.

The woman, Sara El Attar, said she had felt insulted by previous comments by Macron where he’d suggested that headscarves destabilize relations between men and women.

French women “have been castigated these recent years for a simple scarf, without any leader deigning to denounce this injustice,” she said. And she repeated the argument that many veiled women in France make: that people mistakenly think men make them wear headscarves, and it’s not a personal choice.

“For me personally, the question of the headscarf is not an obsession,” Macron said, seeking to defend his record.

Le Pen contends that Muslim headscarves serve as a “marker” of Islamist ideology, which she sees as a gateway to extremism.

Marwan Muhammad, an outspoken former director of a group that campaigned against Islamophobia — and has since been banned by the government — said Macron and Le Pen have turned Islam in France into an electoral football, both trawling for support among their respective audiences.

Le Pen’s more radical positions are “a blessing for Macron,” he said.

“What he wants is to present himself as the alternative, when in fact his policies of the last five years have been destructive for Muslims,” Muhammad added.

“I want a president who accepts me as a person,” Naila Ouazarf, a 19-year-old French student clad in a beige robe and matching head covering, said before heading into an eastern Paris mosque. She said her clothes reflect her religious convictions, adding that neither her mother, nor sister, nor most of her friends cover their heads — which she fully accepts.

But she would defy the promised law should Le Pen become president.

If Le Pen wins, “I’ll take the fine each time I go out” rather than remove her head covering, the young woman said, speaking days before Le Pen and Macron were confronted by Muslim women. The law envisioned by Le Pen would call for unspecified fines on women who fail to respect the headscarf ban.

A young man accompanying Ouazarf, whom he timidly described as his fiancée, said he had a better idea than paying fines.

“If we must, we will leave (France) so that we aren’t bothered, so that people don’t look at us in a bad way,” Mohamed Tagite, also 19, said. 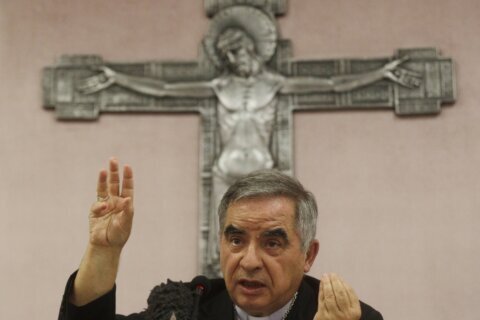