PARIS (AP) — France’s presidential race involves one frontrunner, centrist incumbent Emmanuel Macron, and eleven challengers from the far left to the far right. The two top candidates in Sunday’s first round qualify for the April 24 runoff.

Here’s a look at the main contenders’ key proposals.

EMMANUEL MACRON, 44, centrist incumbent, head of the Republic on the Move party

Ukraine: Macron has been at the forefront of international talks on supporting Ukraine and imposing sanctions on Russia. Macron vows to keep investing in the French military and “significantly” reinforce European armed forces’ capacities and cooperation.

Economy: Macron promises “full employment,” after the jobless rate decreased during his 2017-2022 term to its lowest level in a generation. He wants to progressively raise the retirement age from 62 to 65 and boost the minimum monthly pension.

Immigration: Macron pushes for strengthening external borders of the European passport-free area and creating a new force to better control national borders. He vows to speed up processing of asylum and residence permit applications and to deport those who aren’t eligible.

Ukraine: Marine Le Pen has cultivated ties with Moscow, receiving a loan of 9 million euros from a Russian bank in 2014 and meeting with Putin in 2017. She acknowledged Russia’s invasion of Ukraine “partially” changed her views about Putin, saying he was “wrong.” She says she supports the Ukrainian people and refugees must be welcomed.

Immigration: Le Pen’s plans include ending family reunification policies, restricting social benefits to the French only, and deporting foreigners who stay unemployed for over a year and other migrants who entered illegally.

Economy and energy: She promises to cut taxes on energy and essential goods. She wants to maintain the minimum retirement age at 62 and raise the minimum pension. She vowed to dismantle windfarms and invest in nuclear and hydro energy.

Ukraine: Mélenchon used to call Russia a “partner,” even as European governments were scrambling to find ways to avert a Russian invasion of Ukraine. He now supports the Ukrainian “resistance” and Russians who fight what he calls “dictatorship” in their own country.

Economy: Mélenchon promises to raise France’s minimum wage and minimum pension, and lower the retirement age to 60. He wants to re-establish a wealth tax.

Climate and energy: He vows to inscribe a “green rule” in the Constitution which calls for not using more resources than nature can replenish, and putting an end to intensive farming. He seeks to curb greenhouse gas emissions by 65% in 2030 — instead of the current coal of 40%. He wants the state to lock in energy and food prices, and promises to phase out nuclear energy and aim for 100% renewable energy instead.

Ukraine: Zemmour initially was a supporter of an “alliance” with Russia, and once wished aloud for a “French Putin.” That was before Russia’s invasion of Ukraine, which he condemned. He initially said he would prefer Ukrainian refugees to stay in Poland, but later supported granting them visas if they have ties with France. Zemmour wants France to pull out of NATO’s military command.

Immigration: He wants asylum status to be restricted to no more than 100 people per year — down from about 54,000 last year. He would end welfare benefits for non-European foreigners, outlaw immigration for family reunification, create a coast-guard military force to stop arrivals by sea, and deport any migrants who enter without permission.

Muslim-related policies: Zemmour wants a ban on wearing Muslim headscarves in all public spaces, a ban on building big mosques and on foreign financing of the Muslim faith. He proposes restricting the names that parents can give their newborns, de facto banning many names used by French Muslims.

Economy and energy: He promised to cut taxes on businesses, low-income workers, retired people with small pensions and to give families a bonus for children born in rural areas. He wants to raise the retirement age from 62 to 64 by 2030. He said he would put an end to all windfarms and vowed to develop nuclear energy.

Muslim-related policies: She wants a ban on Muslim headscarves for young girls and in sports clubs. She also wants to ban the burkini, a swimsuit worn by conservative Muslims to cover the entire body, from swimming pools.

Immigration: Pécresse plans to establish immigration quotas. Housing and family benefits would be granted to foreigners only five years after they arrive legally in the country. No residency permit would be provided to those who entered without prior permission.

Economy and energy: She promises to raise low and middle-income workers’ salaries by 10% and to cut taxes on businesses and workers. She wants to raise the retirement age from 62 to 65 by 2030. She vows to develop nuclear energy and renewable energy, but with restrictions on windfarms. 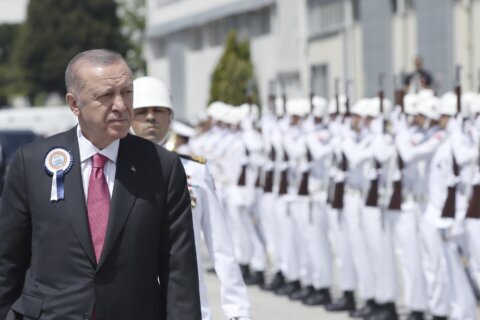