The resignation of a senior Russian government official and his reported move abroad wasn't the first voluntary departure of a person from a state job since the start of Russia's war with Ukraine, but it certainly was one of the most striking.
Listen now to WTOP News WTOP.com | Alexa | Google Home | WTOP App | 103.5 FM

NEW YORK (AP) — The resignation of a senior Russian government official and his reported move abroad wasn’t the first voluntary departure of a person from a state job since the start of Russia’s war with Ukraine, but it certainly was one of the most striking.

A number of public figures have condemned the invasion of Ukraine and left their posts at state-run institutions and companies, which could signal divisions in Russia’s official ranks over the war. So far there have been no indications that the resignations have reached into Putin’s inner circle.

The handful of departures came as Putin blasted those opposing his course as “scum and traitors,” which Russian society would spit out “like a gnat.”

Some of the high-profile figures who have turned their backs on the Kremlin because of the war:

On Wednesday, the Kremlin confirmed media reports about the resignation of Chubais, 66, who was the architect of Yeltsin’s privatization campaign. The reports, citing anonymous sources, said he stepped down because of the war. He hasn’t publicly commented on his resignation.

Under Yeltsin, Chubais reportedly recommended the administration hire Putin, a move that was widely seen as an important stepping stone in Putin’s career. Putin became president of Russia in 2000, when Yeltsin stepped down.

The Russian business newspaper Kommersant reported Wednesday that Chubais was seen in Istanbul this week and ran a photo of a man resembling him at a Turkish ATM. Since the start of the invasion, Istanbul has taken in many Russians looking to relocate.

Arkady Dvorkovich once served as Russia’s deputy prime minister and is currently chairman of the International Chess Federation, or FIDE. He criticized the war with Ukraine in comments made to Mother Jones magazine on March 14 and came under fire from the Kremlin’s ruling party.

“Wars are the worst things one might face in life. Any war. Anywhere. Wars do not just kill priceless lives. Wars kill hopes and aspirations, freeze or destroy relationships and connections. Including this war,” he said.

FIDE banned a top Russian player for six months for his vocal support of Putin and the invasion.

Two days after Dvorkovich’s comments, a top official in the United Russia party demanded that he be fired as chair of the state-backed Skolkovo Foundation. Last week, the foundation reported that Dvorkovich decided to step down.

Lilia Gildeyeva was a longtime anchor at the state-funded NTV channel, which for two decades has carefully toed the Kremlin line. She quit the job and left Russia shortly after the invasion.

She told the independent news site The Insider this week that she decided “to stop all this” on the first day of the Feb. 24 invasion.

“It was an immediate nervous breakdown,” she said. “For several days I couldn’t pull myself together. The decision was probably obvious right away. There won’t be any more work.”

Gildeyeva said news coverage on state TV channels was tightly controlled by the authorities, with channels getting orders from officials. She admitted to going along with it since 2014, when Russia annexed Crimea and began supporting a separatist insurgency in Ukraine.

“When you gradually give in to yourself, you don’t notice the depth of the fall. And at some point, you find yourself face to face with the picture that leads to Feb. 24,” she said.

Zhanna Agalakova was a journalist for another state-run TV channel, Channel One, spending more than 20 years there and working as an anchor and then a correspondent in Paris, New York and other Western countries.

News reports about Agalakova quitting her job began emerging three weeks after the invasion. This week, she gave a news conference in Paris confirming the reports and explaining her decision.

Referring to the 2014 annexation of Crimea and the support of the separatists in Ukraine, she said that she “could not hide from the propaganda anymore,” even as a foreign correspondent. Agalakova said she had to “only talk about the bad things happening in the U.S.”

“My reports didn’t contain lies, but that’s exactly how propaganda works: You take reliable facts, mix them up, and a big lie comes together. Facts are true, but their mix is propaganda,” she said.

No warmth for Russia at diplomatic conference on Antarctica 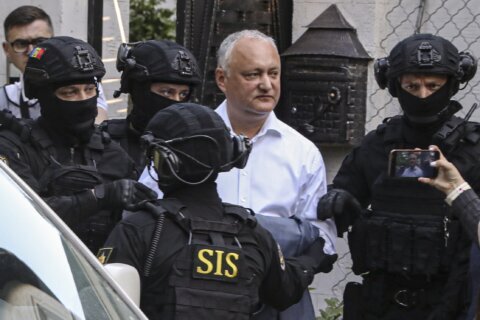