Russia: Infections could surge 6 times higher due to omicron

MOSCOW (AP) — Russian officials on Tuesday sounded the alarm about a looming surge of coronavirus infections due to the highly contagious omicron variant, but stopped short of announcing new restrictions in a hard-hit country where very few limits are in place.

Russia already has by far Europe’s highest pandemic toll at over 317,000 dead. The warning on Tuesday comes just weeks after new infections and deaths in Russia began to decline following another record-breaking surge.

Experts already see indications that the situation with the virus is worsening, Popova added — infection rates in 35 out of more than 80 Russian regions are higher than the country’s average.

Russia this year has been reporting between 15,000 and 18,000 new infections a day, compared to December’s rate of about 30,000 daily cases. The country’s state coronavirus task force has registered over 10.6 million confirmed infections and 317,618 deaths overall.

Russia’s state statistics agency, which user broader counting criteria, puts the death toll much higher, saying the overall number of virus-linked deaths between April 2020 and October 2021 was over 625,000.

Health officials have reported only 305 confirmed cases of omicron so far, but Russian Health Minister Mikhail Murashko said there have been cases of community spread. Popova on Tuesday said the variant was registered in 13 Russian regions, including the country’s biggest cities of Moscow and St. Petersburg.

“Within 7-10 days, I believe, we will be seeing a significant surge in infections,” Sobyanin said, adding that the virus situation in Moscow might become even more “critical” that it was during previous surges.

Moscow health officials reported 4,635 new cases of COVID-19 Tuesday, a toll almost twice as high as the previous day. Russia saw 17,525 new infections on Tuesday — up from 15,830 on Monday.

Despite the warning signs, no new restrictions were announced and it remained unclear if there are plans to introduce any. Russia had only one nationwide lockdown in 2020, and in October many Russians were ordered to stay off work for a week amid a surge of infections and deaths, but generally the authorities have resisted shutting down businesses or imposing any tough restrictions.

Russian lawmakers late last year introduced legislation restricting access to public places to those who have been vaccinated, recovered or medically exempt from getting a jab, but the law hasn’t yet passed all three readings in parliament.

Similar restrictions already exist in some Russian regions, but are often loosely implemented. In others, they were relaxed ahead of the New Year holidays. 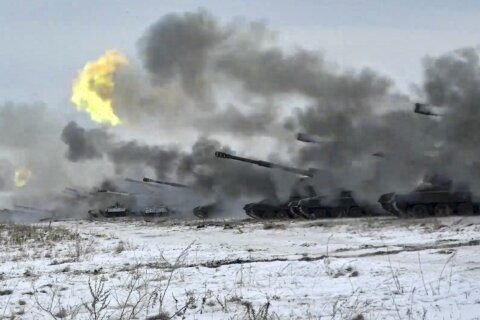