WARSAW, Poland (AP) — Poland on Tuesday became the latest European nation to record 100,000 deaths related to coronavirus, a sad milestone that comes as the country braces for a surge of infections fueled by the omicron variant.

Nearly a quarter of those deaths — some 24,000 — occurred in the most recent wave of infection that began in October, a period in which vaccines have been widely available in the European Union nation of 38 million people.

The bleak marker comes as daily new infections have fallen following a peak in what officials call the country’s “fourth wave” of COVID-19 driven by the delta variant. But with the omicron variant spreading, another large infection wave is looming.

The first two deaths from omicron were reported Monday, both in elderly and unvaccinated people.

Niedzielski said over 18,000 COVID-19 patients are hospitalized, making this “the most difficult situation compared to other waves.”

Poland has struggled through the pandemic with a health care sector strapped by limited funding and the emigration of many medical professionals to Western Europe in the past two decades.

According to OECD statistics, Poland is the EU nation with the lowest number of working doctors in proportion to its population — just 2.4 to 1,000 inhabitants compared with 4.5 in Germany. Poland also has only 5 nurses to 1,000 inhabitants, below the EU average of 8 and far below richer countries like Germany, which has 14.

The vast majority of COVID-19 deaths in the last wave — 83% — are of unvaccinated people. Among people under 44, more than 90% of those who died were not vaccinated.

The vaccination rate in Poland is nearly 56% — much lower than countries in Western Europe but much higher than some other central European countries like Bulgaria and Romania.

Prime Minister Mateusz Morawiecki’s government has sought to encourage vaccinations but is also up against fears and hesitancy among some in the population — and sometimes among the governing Law and Justice party’s own supporters.

In recent days, a school superintendent and party loyalist in the province surrounding Krakow, Barbara Nowak, said she opposed making vaccines compulsory for teachers, an idea supported by the health minister. She claimed that “the consequences of this experiment are not fully established.”

Poland now joins Russia, the U.K., Italy, France and Germany as European nations that have recorded over 100,000 deaths.

Two more Poles identified as victims of hacking with spyware 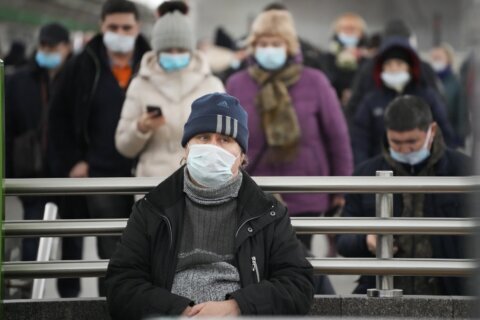 Russia cuts COVID-19 isolation for some as infections soar