From their ballot box this weekend and next will come the name of the candidate — picked from among dozens — that they want their mayor to endorse.

Normally, the choice would be Mayor Olivier Hoffmann’s alone, under a right that, at election time, turns small-potato public office-holders into hot properties — wooed by would-be candidates who need 500 endorsements from elected officials to get onto the April ballot.

But in an inflamed climate of election-time politics, and with fury among opponents of COVID-19 vaccinations increasingly bubbling over into violence directed at elected representatives, Sainte-Anastasie’s staunchly apolitical mayor doesn’t want to be seen taking sides.

Safer, he figures, to let the 2,000 villagers choose for him.

“I know lots and lots of people in the village, many are my friends, I don’t want to create tensions,” Hoffmann said in a phone interview. “So no politics.”

“Politics,” the mayor added, “often do more harm than good.”

Even in a country with ingrained traditions of violent contestation, where the revolutionaries of 1789 guillotined King Louis XVI and Queen Marie-Antoinette, an upsurge of physical and verbal attacks and online torrents of hatred directed at public officials — often, now, over COVID-19 policies — are ringing alarm bells.

Violence hasn’t approached the level of the storming of the U.S. Capitol by Donald Trump supporters in 2021. Nor have French lawmakers been killed like their counterparts in Britain. There, the fatal stabbing of a Member of Parliament in October prompted renewed national soul-searching about the safety of elected officials with a proud tradition of readily meeting voters.

Still, there’s mounting disquiet in France in the wake of apparent arson attacks in December that targeted a lawmaker and a mayor, both aligned with President Emmanuel Macron, and other violence targeting elected officials as the government steadily increased pressure on the non-vaccinated to get COVID-19 jabs to curb the surge of infections fueled by the omicron variant.

The Interior Ministry recorded a year-on-year increase of 47% in acts of violence directed at elected officials through the first 11 months of 2021, with 162 lawmakers and 605 mayors or their deputies reporting attacks. Lawmakers say death threats have become everyday occurrences. Titled “decapitation,” an email received by lawmaker Ludovic Mendes in November read: “That’s how we dealt with tyrants during the French Revolution.”

This month, during protests against France’s vaccine pass that bars the unvaccinated from cafés and other venues, about 30 angry people besieged the office of lawmaker Romain Grau, shoving him and yelling furiously.

“Death! We’ll get you all!!” shouted one man who launched a slap at the lawmaker’s head. Grau later told broadcaster TF1 that he feared the confrontation would finish “in a blood bath and a lynching.”

When lawmaker Pascal Bois’ garage went up in flames in December, the words, “Vote no” and “It’s going to blow!” were spray-painted on an outside wall, which he took as an intimidation attempt before parliamentary passage of the vaccine pass this month.

The National Assembly president, Richard Ferrand, says more than 540 of the 577 lawmakers have reported threats or verbal and physical attacks.

“France isn’t bathed in fire and blood. These are acts of brutal minorities,” Ferrand told the parliamentary TV channel this week. “Still, it seems to me that we have ratcheted up a notch, expressing a rage that is new.”

When Bernard Denis was jolted awake by a loud boom in the middle of the night in December, the mayor of the Normandy village of Saint-Côme-du-Mont discovered his cars on fire and the words, “The mayor supports Macron,” daubed in black on a wall.

Around 42,000 elected officials are empowered to sponsor a candidate for the presidential race. The bar of 500 endorsements is intended to whittle down the field. Endorsing a candidate doesn’t require agreeing with their politics. Some sponsors simply want a politically broad election choice. But because endorsements are public, they’re also not without potential consequences.

In Sainte-Anastasie, Hoffmann is keen to participate. But the mayor wants to avoid any risk of villagers turning on him if he decides alone, of them saying: “’You endorsed him so you support him, you’re this and that, you’re red, yellow, green, blue, blue-white-and-red’ or whatever.”

Hoffmann is instead pledging to endorse their choice, even if the winner of the ad hoc vote he’s organizing isn’t aligned with his own politics, which he keeps to himself. In the 2017 presidential run-off that Macron won, the village voted by a large majority for the loser, far-right leader Marine Le Pen, who is running again.

Villagers will choose from around 45 would-be candidates, including Macron, who Hoffmann assumes will seek re-election even though the president hasn’t yet said so.

And thus, Hoffmann hopes, harmony will reign in what he calls “the village of my heart.”

“I want to give it, my village, everything I have,” he said, “and I don’t want politics to encroach on that.” 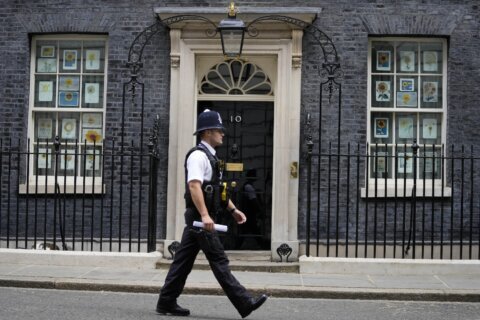