LOS LLANOS DE ARIDANE, Canary Islands (AP) — A fresh river of lava from the volcano on Spain’s La Palma island threatened Wednesday to engulf a parish church that has so far survived the eruption that shows no signs of relenting after 10 weeks.

The nearest lava flow to the Los Llanos de Aridane church has slowed down since it started over the weekend but it is still only 1 kilometer (0.6 miles) away.

Molten rock from the Sept. 19 eruption on La Palma, part of Spain’s Canary Islands archipelago, has consumed over 1,500 buildings and covered over 1,130 hectares (2,800 acres) including banana farms, the island’s main source of revenue along with tourism.

A nearby cemetery has been completely covered, burying for a second time the remains of 3,000 people. A fissure that volcanologists believe spouted a gusher of lava has also left a gaping hole in front of a house whose bottom floor was completely covered by a mountain of ash.

“The lava is flowing mostly on top of previous flows that have hardened,” Noelia García, the mayor of Los Llanos de Aridane, told Canary Islands Television. “But we won’t dare make a prediction (about its course).”

The volcano is going strong and seismic activity in the area has increased in recent days. Spain’s National Geographic Institute registered 341 earthquakes over the past 24 hours.

Thousands of residents have been displaced by the eruption, which has not claimed any lives on the westernmost member of the archipelago in the Atlantic Ocean off the northwest coast of Africa.

Follow all AP stories on the La Palma volcano at https://apnews.com/hub/volcanic-eruptions 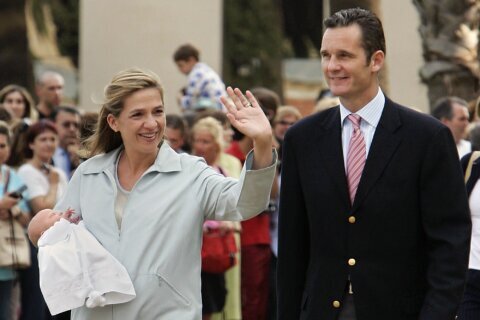