LONDON (AP) — British Prime Minister Boris Johnson on Wednesday ordered an inquiry and said he was “furious” after a leaked video showed senior members of his staff joking about holding a lockdown-breaching Christmas party.

The video has poured fuel on allegations that officials in the Conservative government flouted coronavirus rules they imposed on everyone else. It release came as Johnson urged people to work from home and introduced vaccine passes for crowded venues to try and slow the spread of the new omicron variant.

“I understand and share the anger up and down the country” at officials seeming to make light of lockdown rules, Johnson said.

“I was also furious to see that clip,” he told lawmakers in the House of Commons. “I apologize unreservedly for the offense that it has caused up and down the country, and I apologize for the impression it gives.”

For days, the prime minister’s office has been trying to rebut reports that Johnson’s staff held a December 2020 office party — complete with wine, food, games and a festive gift exchange — when pandemic regulations banned most social gatherings.

According to multiple British media outlets, the party took place on Dec. 18, when restrictions in London prohibited indoor social mixing, and a day before Johnson tightened the rules even further, ruling out family Christmas celebrations for millions of people.

The video, recorded on Dec. 22, 2020 and aired by broadcaster ITV, shows then-press secretary Allegra Stratton appearing to joke about an illicit party at the prime minister’s Downing Street office. The recording appears to be a mock news conference, held as a rehearsal for televised government media briefings.

Another aide, playing a journalist, says: “I’ve just seen reports on Twitter that there was a Downing Street Christmas party on Friday night, do you recognize those reports?”

As laughter is heard, Stratton, the press secretary, says: “I went home” and asks colleagues: “What’s the answer?” Another voice can be heard saying: “It wasn’t a party, it was cheese and wine.”

“Is cheese and wine all right? It was a business meeting,” a laughing Stratton says.

Stratton, who later became the government’s climate-change spokesperson, quit on Wednesday, saying she hadn’t intended to make light of “rules that people were doing everything to obey.”

“I will regret those remarks for the rest of my days and I offer my profound apologies to all of you,” she said in a televised statement outside her home.

For several days Johnson’s spokespeople have insisted that no party was held and no rules were broken. But on Wednesday, Johnson said he had ordered Britain’s top civil servant, Simon Case, to investigate. He said anyone found to have broken the rules would be disciplined.

Thousands of people in Britain have been fined since early 2020 for breaking restrictions by holding illegal gatherings. London’s Metropolitan Police said officers had reviewed the leaked video but would not investigate the alleged party due to a lack of evidence and a department policy not to investigate retrospective breaches of coronavirus regulations.

The leader of the opposition Labour Party, Keir Starmer, said the prime minister should be “ashamed.”

Starmer contrasted the government’s behavior with that of Queen Elizabeth II, who in April sat alone at the funeral of her husband of 73 years, Prince Philip, because of social-distancing rules.

The Christmas party claims are the latest in a string of allegations of rule-breaking and ethics violations stirring discontent against Johnson’s Conservative government, even among some of the party’s own lawmakers.

Last year, Johnson resisted pressure to fire his then-top aide, Dominic Cummings, for driving across England to his parents’ house while he was falling ill with COVID-19, in breach of a nationwide “stay-at-home” order. Cummings has since left the government.

In June, Health Secretary Matt Hancock resigned after leaked video showed him kissing an aide in a government office while both of them were married to other people, at a time when restrictions forbade hugs and other physical contact outside one’s own household.

Dr. Saleyha Ahsan from the group COVID-19 Bereaved Families for Justice said the Christmas party allegations were a “bullet to the chest” for families who lost loved ones during the pandemic. Many faced restrictions on visiting dying relatives in hospitals.

Ahsan said it was “one rule for them and the rest of us have to adhere to different rules.”

With almost 146,000 COVID-19 deaths in the pandemic, Britain has the second-highest virus death toll in Europe after Russia.

While many questions remain about the new variant and delta remains the dominant strain around the globe, Johnson said omicron is “spreading much faster than any variant we have seen before.”

Johnson’s government removed almost all restrictions in July, but on Wednesday reversed course and triggered its “Plan B” for England — ordering face coverings be worn in indoor public places, requiring proof of vaccination or a negative test to enter nightclubs and asking people to work from home if they can.

Some lawmakers worried the “partygate” allegations would undermine public compliance with the measures. But Johnson said he was confident people would do the right thing.

“I think the British public … can see the vital importance of the medical information that we’re giving, and they can see the need to take it to heart and act upon it,” he said at a news conference. 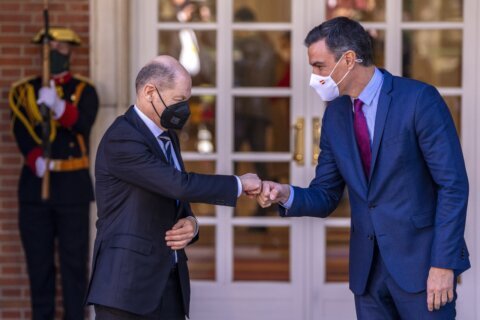 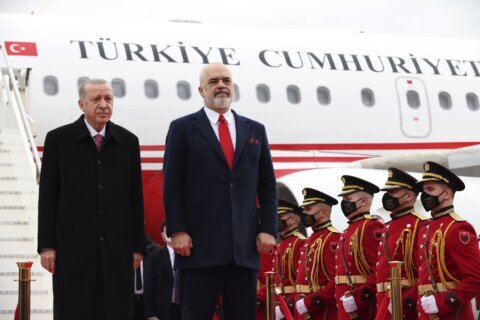