Scholz to Germans: Let’s all help to defeat COVID in 2022

BERLIN (AP) — Chancellor Olaf Scholz is urging Germans to pull together to defeat the coronavirus in 2022 and promising to react “quickly and decisively” to the advance of the omicron variant.

In his first televised New Year’s message since taking over from longtime leader Angela Merkel three weeks ago, Scholz also pledged to use Germany’s presidency of the Group of Seven industrial nations to make the G-7 a “trailblazer” in climate-neutral economic activity.

Much of Scholz’s message was taken up with the immediate challenge of fighting COVID-19. The highly transmissible omicron variant is causing steep rises in case numbers in Europe and making inroads in Germany, though official figures have yet to reflect that fully.

On a day when major New Year’s Eve celebrations were canceled once again and firework sales banned, Scholz thanked Germany’s residents for making an effort to keep to the rules. He urged them to take restrictions introduced in recent days, including a cap on the size of private gatherings, “very seriously … to protect us all.”

Many wonder what omicron will mean, he acknowledged: “I promise you that we will react quickly and decisively.”

He renewed appeals for people to get vaccinated and to get booster shots, saying that “now it comes down to speed — we must be faster than the virus.”

The government says it fulfilled a pledge to administer 30 million shots between mid-November and the new year, and wants to give another 30 million by the end of January.

“Let us together do everything — really everything — so that we can finally defeat corona in the new year,” Scholz said, according to a text of his remarks released by the government before its broadcast Friday.

The center-left leader said the other big challenge Germany faces is to “lay the foundation stone” for progress in Europe’s biggest economy. He sketched out his three-party government’s plans, including its pledge to expand the use of renewable energy with the help of “massive investments.”

“As a modern industrial country, we will reach our climate targets,” Scholz said. He noted, however, that no country can achieve “progress for a better world” alone.

Germany takes over the leadership of the G-7 for a year on Saturday. It will host the group’s annual summit in June at Elmau in the Bavarian Alps, where it also held the 2015 summit.

“We will use our presidency so that this group of states becomes a trailblazer — a trailblazer for climate-neutral economic activity and a fair world,” Scholz said.

“We are setting out into a new era — a time that will be good if we shape it actively,” he said.

German woman allegedly took 6yo daughter to watch IS stoning 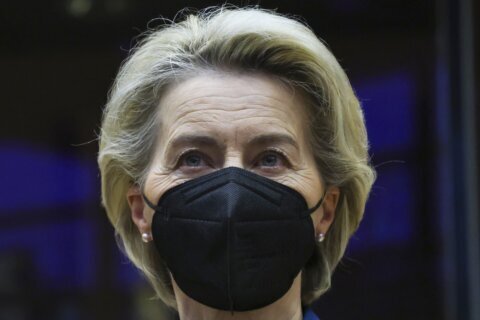