MOSCOW (AP) — Russia’s state statistics agency says that 74,893 people with COVID-19 died in October — the highest monthly tally in the pandemic that comes as the country grappling with a major surge of coronavirus infections and deaths.

A report by Rosstat on Friday brought the overall number of virus-linked deaths between April 2020 and October 2021 to over 537,000 — almost twice the widely-cited toll reported by Russia’s state coronavirus task force to date. Rosstat uses broader criteria in its tallying system than the task force.

According to the report, out of nearly 75,000 deaths in October, 58,822 were directly caused by confirmed COVID-19; 9,912 other deaths were likely caused by the virus, but it wasn’t confirmed by a test. In 1,141 cases, the virus “significantly” contributed to fatal complications of other diseases, and 5,018 people tested positive for the virus but died of other causes.

Deputy Prime Minister Tatyana Golikova, who also heads the task force, said Friday that Russia’s overall mortality grew by 20.3% in October this year, compared to the same period in 2020, and ascribed all of the growth to COVID-19.

Russia in recent months has faced its deadliest and largest surge of coronavirus cases, with officially reported infections and deaths regularly hitting all-time highs and only slowing in the past couple of weeks.

The surge came amid low vaccination rates and poor compliance with public health measures, and more regions this week have made COVID-19 shots mandatory for residents aged 60 and over in an effort to boost vaccine uptake and keep contagion and fatalities down.

Authorities in the northern region of Komi said Friday that people in that age group are required to get fully vaccinated by Feb. 1. The Omsk region in Siberia introduced a more stringent timeline Thursday that obligates those 60 and above to get their first vaccine dose by Dec. 24 and their second dose by Jan. 15.

About 40% of Russia’s nearly 146 million people have been fully vaccinated, even though the country approved a domestically developed COVID-19 vaccine — Sputnik V — months before most of the world.

Two people who returned to Russia from South Africa on Friday tested positive for COVID-19 and their test samples are being studied to determine whether they have the new omicron variant, Russian authorities said.

The two have been hospitalized, Russia’s public health watchdog Rospotrebnadzor said in a statement. It wasn’t immediately clear whether their condition required hospital care or they were admitted to a hospital for additional testing because of the variant.

Russia restricted entry for all foreigners traveling from countries in Southern Africa and required all Russian nationals returning from South Africa or neighboring countries as of Thursday to quarantine for 14 days because of the the omicron variant, which was first reported by scientists in South Africa.

Much remains unknown about the new variant, including whether it is more contagious, as some health authorities suspect, whether it makes people more seriously ill, and whether it can thwart coronavirus vaccines.

Russia on Friday reported 32,930 new cases and 1,217 deaths. The coronavirus task force has reported a total of over 9.7 million confirmed infections and 278,857 deaths in the pandemic — a fatality toll much lower than that of Rosstat, which is yet to release data for the month November that is likely to make the toll even higher.

Russian officials have ascribed the differences in reporting death tallies to the fact that the task force only includes deaths for which COVID-19 was the main cause, and uses data from medical facilities. Rosstat uses broader criteria for counting virus-related deaths and takes its numbers from civil registry offices where registering a death is finalized. 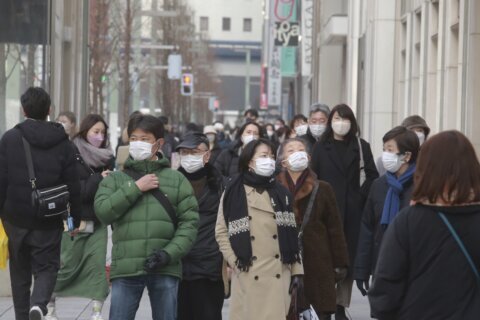