Jittery Ukrainian villagers ‘fear that a big war will start’

The seven-year-old conflict in eastern Ukraine has all but emptied the village of Nevelske located near the line of contact between Russia-backed separatists and Ukrainian forces. Only five people still live in the village. That's down from a population of 286 in 2014. Shelling last month has damaged or destroyed 16 of the 50 houses there. Small-arms fire frequently is heard during the day. And artillery often booms at night. A Russian troop buildup near Ukraine has stoked fears of renewed large-scale fighting. The situation has rattled the already nervous residents.
Listen now to WTOP News WTOP.com | Alexa | Google Home | WTOP App | 103.5 FM
(1/11) 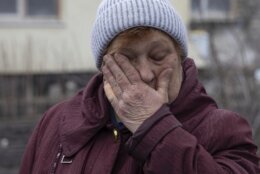 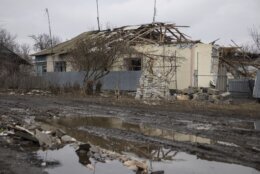 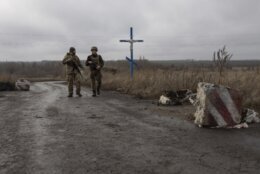 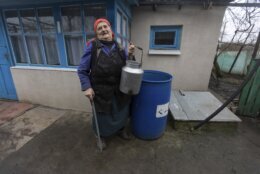 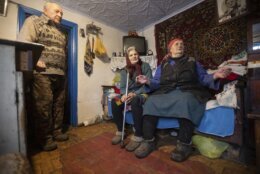 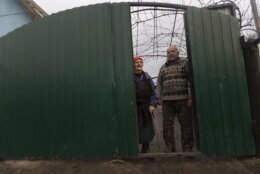 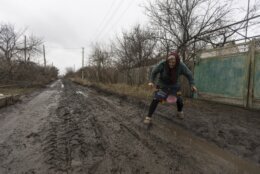 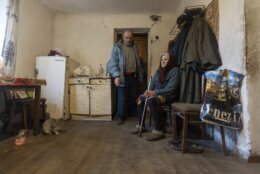 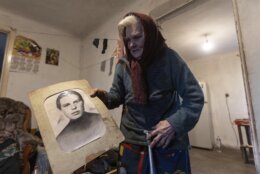 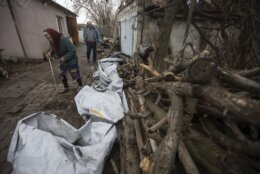 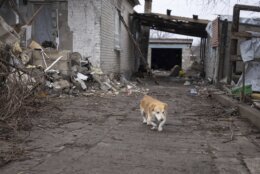 NEVELSKE, Ukraine (AP) — Liudmyla Momot wipes away tears as she searches for clothes and household items to salvage from the ruins of her home that was shelled by Russia-backed separatists in eastern Ukraine.

Her village of Nevelske, northwest of the rebel-held city of Donetsk, is only about 3 kilometers (2 miles) from the line of contact between the separatists and the Ukrainian military and has been emptied of all but five people.

Small arms fire frequently is heard in the daytime, giving way to the booms of light artillery and mortar shelling after dusk.

With the bloody conflict now more than seven years old, there are fears in Ukraine and the West that a buildup of armed forces on Russia’s side of the border could lead to an invasion or the resumption of full-scale hostilities.

Rebels targeted Nevelske with shelling twice in the last month, damaging or destroying 16 of the village’s 50 houses and rattling the handful of nervous residents who remain.

“The worse Ukraine-Russia relations are, the more we simple people are suffering,” said 68-year-old Momot, who has worked at a dairy farm all her life.

Now with no home, “who could have imagined that? I was preparing for the winter, stocking up coal and firewood.”

After the shell hit her house, Momot fled to a nearby settlement where her son lives. But the anxiety has followed her there.

“We fear that a big war will start. People are scared and packed up their bags,” said Momot, who collected some blankets, warm clothes and other items in the debris.

The conflict in the eastern industrial heartland known as the Donbas erupted in April 2014, weeks after Russia annexed the Crimean Peninsula following the ouster of Ukraine’s Moscow-friendly former president. Ukraine and the West have accused Russia of supporting the rebels with troops and weapons, but Moscow says that Russians who joined the fight were volunteers acting on their own.

More than 14,000 people have been killed in fighting that has driven more than 2 million people from their homes in the east.

When the conflict began, Nevelske had a population of 286. Now, the five older people who remain in the ruined village collect rainwater for drinking and cooking. Between shipments of humanitarian aid, they rely on eating stale bread.

“We have grown accustomed to the shelling,” said 84-year-old Halyna Moroka, who has stayed in Nevelske with her disabled son.

A 2015 peace agreement brokered by France and Germany ended large-scale battles, but frequent skirmishes have continued. The Organization for Security and Cooperation in Europe, which monitors the shaky cease-fire, has reported an increasing number of such incidents, with both sides trading the blame for truce violations.

“The security situation along the contact line is still of concern, with a high level of kinetic activity,” Mikko Kinnune, the OSCE representative for the group that involves representatives of Ukraine, Russia and the rebels, said earlier this month.

Amid the recent Russian troop buildup, Washington and its allies have warned Moscow that it will pay a high economic price if it attacks Ukraine. Moscow denies having such intentions and accused Ukraine of planning to reclaim control of rebel-held territory, something Kyiv has rejected,

Russian President Vladimir Putin has urged the West to provide guarantees that NATO won’t expand to include Ukraine or deploy the alliance’s forces and weapons there, calling that a “red line” for Moscow. The U.S. and its allies have refused to make such a pledge, but U.S. President Joe Biden and Putin decided last week to hold talks to discuss Russian concerns.

The geopolitical threats resonate in Nevelske on those few occasions that the village has power, enabling its remaining residents to watch Russian television news.

“We don’t want war!” exclaimed 75-year-old Kateryna Shklyar, who shares her fears with her husband, Dmytro. Their daughter and grandchildren live in nearby Krasnohorivka, a Ukrainian-controlled western suburb of Donetsk.

“For how long will this torment last?” asked Shklyar. “It has worn out our souls and hearts. You can’t call that life, but we have no place to go.”

Humanitarian groups provide basic supplies to Nevelske and other villages and even try to offer housing in safer areas, but their resources are limited.

“I just survive each day, trying to make it to the evening, and my soul aches,” said Moroka, who has lost vision in one eye but can’t get any medical help.

“We are frightened,” she added. “It’s really scary to sit here and wait for death. It’s horrible!”