Harry’s Bar in Paris is celebrating the 100th birthday of the Bloody Mary, the vodka-tomato juice cocktail believed to have been invented in the iconic watering hole in 1921.
Listen now to WTOP News WTOP.com | Alexa | Google Home | WTOP App | 103.5 FM
(1/8) 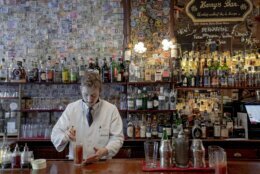 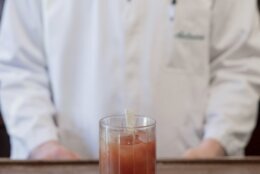 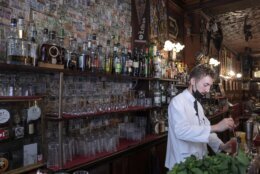 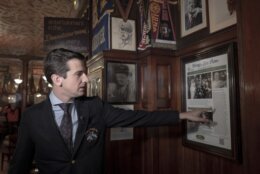 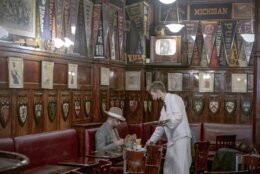 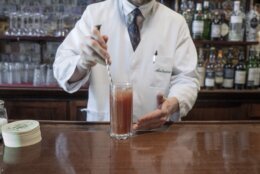 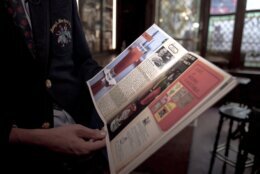 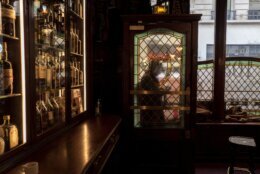 PARIS (AP) — Harry’s Bar in Paris is celebrating the 100th birthday of the bloody mary, the vodka-tomato juice cocktail believed to have been invented at the iconic watering hole in 1921.

The centenary events this week bring a welcome respite from winter gloom and worries about the omicron variant of the coronavirus.

The bar is carefully checking COVID-19 health passes as foreign visitors gather to sample the drink closely associated with Harry’s Bar, whose patrons over the past century have included writers Ernest Hemingway and F. Scott Fitzgerald.

According to the history of Harry’s, bartender Fernand Petiot invented the cocktail, and the recipe was first published in a book called “Harry’s ABC of Cocktails” in 1921. The bar serves an estimated 12,000 bloody marys a year.

“You make it directly in the glass,” Agnelli said as he stood at the counter where Petiot first performed the now well-established ritual 100 years ago, at the dawn of what became known as the roaring 1920s.

Harry’s Bar plans to host a celebration on Thursday night despite concerns about the spread of omicron variant of the coronavirus in Europe and a surge in new virus infections across France.

Franz-Arthur MacElhone, a great-grandson of bar founder Harry MacElhone, said the celebration would take place in line with government regulations: the health passes of patrons from around the world will be checked, hand sanitizers will be distributed, and bar staff will wear masks.

In recent days, the French government expanded the places where passes are required, including all restaurants and a growing number of events and venues. To get one, people must show proof of full vaccination, a negative virus test less than 24 hours old, or recent recovery from COVID-19.

The French government closed nightclubs and tightened social distancing measures but is trying to avoid a new lockdown.

The health protocol is the only visible change inside the bar that used to be located on New York’s 7th Avenue before it was dismantled, shipped to Europe and rebuilt in central Paris in 1911.

For Harry’s patrons, the timeless décor is a reassuring fixture, particularly at a time of uncertainty due to the pandemic.

“Once you walk in, you leave all your worries aside,” said Ihab Hassan, 61, a retired businessman from Egypt and a regular at the bar since the 1970s.

The coronavirus pandemic was not enough to get in the way of his favorite Paris pastime, Hassan said with a bloody mary on the counter in front of him.

Sitting next to Hassan were an American, Jay Sing, and an Australian, Renée DiGeorgio. They shared their thoughts on the famous cocktail with an Associated Press reporter, acknowledging they had already consumed a few.

“Sometimes, with breakfast, for my hangover, we drink bloody marys,” said DiGeorgio, 42, who works in the mining industry and is based in the Democratic Republic of Congo.

“This is a really nice bloody mary,” he said. “It’s actually the first time I’ve ever drunk a bloody mary when the sun’s down!”

All three men said they took the necessary health precautions to be safe and in compliance with government anti-virus regulations.

“I have four vaccines in me,” said Sing, 28, a tech industry worker from New York. “I’m like the Iron Man. Nothing is touching me!”

MacElhone, the great-grandson of the bar’s founder, recounted different legends surrounding how the bloody mary got its name.

“Petiot said it was for a dancer that he was very fond of called Mary,” MacElhone explained.

“She used to work in a place in Chicago called the Bucket of Blood,” MacElhone said. But that’s only one explanation for the name of the famous drink.

There are others, MacElhone said.

“There’s a Hemingway story,” he said. “It was just before he got married, and he had been dating somebody called Mary.”

As that story goes, Hemingway allegedly did not want to have alcohol on his breath and asked for a drink mixed with juice.

Tomato juice was added, and “while he was drinking it, he was saying ‘bloody Mary’”, MacElhone said.