THE HAGUE, Netherlands (AP) — A Dutch appeals court on Tuesday upheld a lower court’s decision to throw out a civil case against Israel’s defense minister and another former senior military officer over their roles in a deadly 2014 airstrike.

The Hague District Court ruled in January 2020 that the case against Israeli Defense Minister Benny Gantz and former air force commander Amir Eshel couldn’t proceed because the men have “functional immunity from jurisdiction.”

The Hague Court of Appeal said Tuesday that the lower court was right to rule that Gantz, who was military chief of staff at the time of the airstrike, and Eshel had immunity because they were carrying out Israeli government policies.

The case was brought by Ismail Ziada, who lost six members of his family in the airstrike that lawyers for the men argued was part of an Israeli military operation during the 2014 Gaza conflict. He wanted the Dutch court to order Gantz and Eshel to pay damages and his lawyers argued that the men didn’t have immunity because their actions amounted to war crimes.

Ziada said Tuesday’s ruling was “in contradiction with any sense of justice” and branded the judges “cowards” for their decision.

Responding to the Dutch court decision while on a tour of the Gaza border, Gantz said he was proud of his command of the Israeli military, which he said “adheres to values and human rights” and observes international law ”with a real goal to protect the citizens of Israel and allow them to live in peace and calm.”

“The appeals court recognized their immunity from civil prosecution for anti-terror activities in the framework of operation ‘protective edge.’ This is a very important legal precedent that protects all IDF (Israeli military) commanders from similar attempts,” Schondorf tweeted.

The lower court also said Ziada was free to sue the men in Israel. At hearings in 2019, Ziada rejected the idea that he has access to justice in Israel as “farcical as well as vicious.”

Ziada told an earlier hearing that he lost his mother, three brothers, a sister-in-law and a 12-year-old nephew in the airstrike.

Israel’s Justice Ministry told the court before the 2020 decision that an internal Israeli military investigation determined the airstrike had killed four militants hiding in the house. It said the attack was permissible under international law. Gaza’s Hamas rulers themselves have said that two militants were in the building.

Ziada’s lawyer Liesbeth Zegveld said the judges had taken a conservative interpretation of the law.

“They had the … legal space to decide differently in our favor, legally speaking, but then there’s no precedent,” Zegveld said. “So they had to do something not so much new, but something that hadn’t happened before.”

The ruling can be appealed to the Dutch Supreme Court.

Tia Goldenberg contributed to this report from Tel Aviv, Israel.

Danish troops to leave Mali after call from country’s rulers 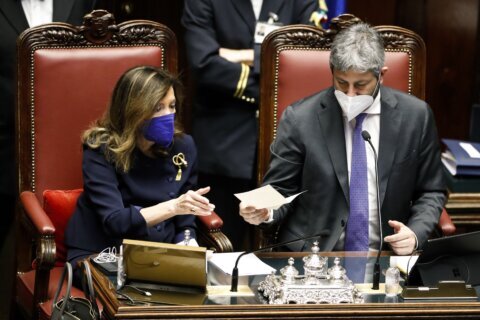 New Italy president still elusive after 4th round of voting