Washington’s relationship with Paris hit a historic low this year after a U.S.-British submarine deal with Australia scuttled a French contract to sell subs to the Australian navy. Late last month, President Joe Biden told French President Emmanuel Macron the U.S. had been “clumsy” in its handling of the issue.

Harris started her trip by meeting with American and French scientists working on COVID-19 preparedness at the Pasteur Institute in Paris.

“Some of the most significant discoveries in science on any issue, from rabies to HIV-AIDS, to breast cancer, to mRNA and what we do around vaccines and pandemics, have occurred here in collaboration with French scientists, American scientists, scientists around the world coming together,” Harris, a former California senator, said.

Harris is scheduled to sit down with French President Emmanuel Macron at the Élysée Palace on Wednesday for talks expected to focus on ways the two nations can better coordinate their efforts in the Indo-Pacific.

Harris and Macron are also expected to discuss global health, space and other issues. Harris is set to deliver a Thursday speech at the annual Paris Peace Forum and to participate Friday in the Paris Conference on Libya. 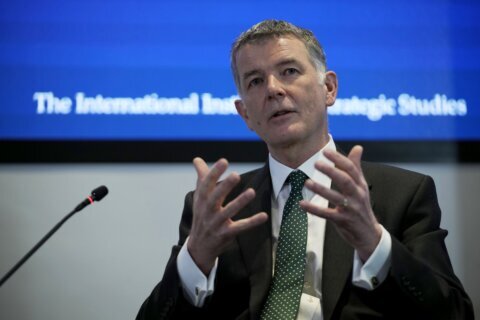 Mercedes, Stellantis to work with US firm on new batteries