Jill Biden, a descendant of Italians, donned an apron and rubber gloves Monday to help culinary students at a Navy school in Italy make ravioli and noodles, a task she says she mastered with her grandmother.
Listen now to WTOP News WTOP.com | Alexa | Google Home | WTOP App | 103.5 FM
(1/8) 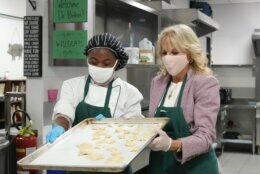 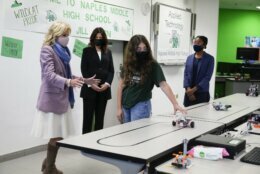 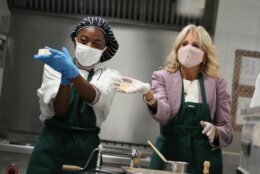 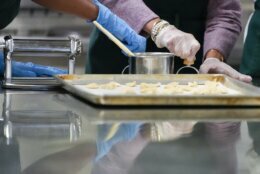 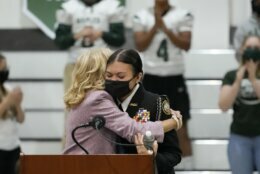 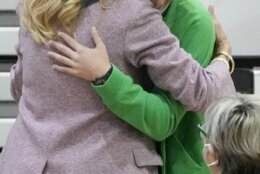 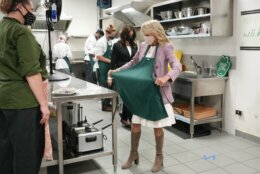 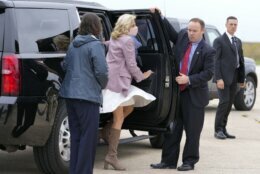 NAPLES, Italy (AP) — Jill Biden, a descendant of Italians, donned an apron and rubber gloves Monday to help culinary students at a Navy school in Italy make ravioli and noodles, a task she says she mastered with her grandmother.

She visited the school as part of her work back home supporting military families through an initiative named Joining Forces. She also dropped by a robotics class and praised the fortitude of military kids and their parents at a pep rally held in the gymnasium.

“I used to make homemade pasta all the time for dinner,” Biden said after she and a female student showed off their tray of cheese ravioli for news cameras trailing the first lady.

Her paternal grandparents were Italian and she spoke of how her grandmother would hang the fresh noodles in her kitchen. Sometimes she helped make the pasta.

In the robotics class, she listened as students described the robots they had built and watched as two traced a black line on a table. When a third robot malfunctioned, she said: “Sometimes that’s life.”

At the pep rally, the first lady praised military children for being strong enough to constantly adjust to new homes, new schools and new friends.

She talked about how hard it was for her now-teenage granddaughter Natalie when her father — Biden’s late son Beau — was sent to Iraq for a year with the Delaware Army National Guard in fall 2008.

She told the adults their choice to enlist in the military had helped their children become “people who are ready for whatever the world has in store for them. Isn’t that what all parents want for our children?”

After one girl told Biden she “almost cried” during the speech, Biden pulled her into an embrace.

Biden accompanied her husband, President Joe Biden, to Rome to participate in the Group of 20 nations summit that ended on Sunday. He flew to Glasgow, Scotland, on Monday to attend a major U.N. climate conference. She boarded her plane back to Washington after the school visit.

This story has been corrected to reflect that robot traced a black line on a table, not the floor.