France, Britain spiral into crisis in wake of migrant deaths

CALAIS, France (AP) — The already fractious relationship between France and Britain spiralled further downward into anger and incomprehension Friday, with the two erstwhile European partners at loggerheads about how to stop migrants from embarking on dangerous crossings of the English Channel that killed at least 27 people in a sinking this week.

Even as the British government insisted that the two countries “remain close friends and partners,” their words, acts and disputes over migration, fishing and how to rebuild a working relationship in the wake of Britain’s exit from the EU increasingly suggested otherwise.

President Emmanuel Macron scolded Prime Minister Boris Johnson for making public a letter that the British leader sent to the French leader on Thursday. Most notably, Johnson proposed that France take back migrants who illegally cross the Channel from French to British shores. Macron’s spokesman quickly and summarily dismissed the idea, and the French president made his displeasure clear that Johnson posted the letter — addressed “Dear Emmanuel” — on Twitter.

“I am surprised by methods when they are not serious,” Macron said on a visit to Italy. “You don’t communicate from a leader to another on these matters via tweets and letters that are made public. We are not whistleblowers.”

The letter and France’s response were the latest crossing of swords between two nations with a storied history of break-ups, make-ups and, not infrequently, of revelling in rubbing each up in the wrong way. The economic, political, social and psychological earthquake of Britain’s divorce from the EU has made cross-Channel cooperation harder still, and further complicated the long love-hate relationship between Paris and London.

Even in the wake of the deadliest migration accident to date in the Channel, Macron and Johnson appeared increasingly to be talking past each other — or, in Paris’ case, barely willing to talk at all. Macron’s government spokesman, Gabriel Attal, said Johnson’s point-person on immigration, Home Secretary Priti Patel, was no longer welcome at a meeting Sunday of European ministers who’ll explore ways to crack down on migrant-smuggling networks.

Attal described Johnson’s letter as “fundamentally mediocre and totally uncalled-for in its manner.” Suggesting British duplicity, Attal also said it “doesn’t correspond at all” with discussions that Johnson and Macron had Wednesday after the sinking of an inflatable craft laden with migrants off the northern French coast.

“We are sick of double-speak,” Attal said.

And he dismissed Johnson’s proposal that France take back migrants who cross illegally to British shores as “clearly not what we need to solve this problem.”

Ever-increasing numbers of people fleeing conflict or poverty in Afghanistan, Sudan, Iraq, Eritrea or elsewhere are risking the perilous journey from France, hoping to win asylum or find better opportunities in Britain. More than 23,000 people have already entered the U.K. on largely unseaworthy small boats this year, up from 8,500 in 2020 and just 300 in 2018, according to data compiled by the British Parliament.

In London, Johnson’s spokesman Jamie Davies said the prime minister had no regrets about tweeting the letter “written in the spirit of partnership and cooperation.”

He expressed hope for a French U-turn on the decision to un-invite Patel to Sunday’s ministerial meeting on the migration crisis, saying: “Friends and neighbors need to work together to address this global challenge collectively, and we have been clear that we need to do more.”

A French judicial investigation into Wednesday’s sinking has been turned over to Paris-based prosecutors who specialize in complex cases of organized crime. The prosecutors’ office said it wouldn’t comment on whether investigators are making progress on identifying victims’ nationalities or causes of the tragedy.

A French fisherman who said he was first to spot and raise the alarm about bodies in the water on Friday described the scene as “a horror movie.” Karl Maquinghen said he is haunted by the thought that people might still be alive had he and his shipmates reached them sooner.

“To see so many bodies like that, next to us. Children. I don’t know how to explain it. Horrific,” Maquinghen said, voice cracking with emotion, in comments broadcast by French coastal radio Delta FM.

“The sight of them like that, heads in the water, will stick with us,” he said. “We tell ourselves: ’Had we got there five or ten minutes earlier, we could perhaps have saved them.’ We can’t sleep.”

While the sinking has brought long-simmering French-British tensions to a head, it’s not their only issue of discord.

Adding to the climate of tension: French fishing crews on Friday briefly blocked French ports, ferry traffic across the English Channel and the freight entrance to the undersea Eurotunnel. The aim of the protest over post-Brexit fishing licenses was to disrupt flows of Britain-bound goods and travelers and signal that greater disturbance could follow amid the Christmas shopping rush.

“The British have access to the European market, while we do not have access to British waters. This is not normal, the British government must respect the agreement,” Olivier Lepretre, president of the regional fishing committee, said in the port of Calais.

He described the blockades as “a warning shot.”

Calais — a major jump-off point for migrants aiming to reach Britain — is also where ministers from France, Germany, the Netherlands, Belgium and EU officials will meet on Sunday.

Without the British minister.

“The ministers will work seriously to resolve a serious matter with people who are serious,” Macron said. “Afterwards, we will see with the British how to act effectively, if they decide to be serious.” 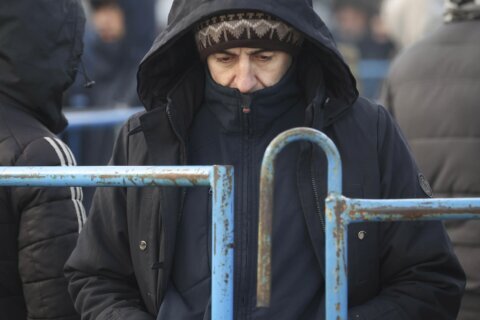