NICOSIA, Cyprus (AP) — France has agreed to help initiate talks between Cyprus and French-speaking African countries for a deal to take back their citizens whose asylum applications have been rejected, the Cypriot interior minister said Saturday.

Interior Minister Nicos Nouris said his French counterpart Gerald Darmanin made the pledge during a brief visit to the Cypriot capital on Friday.

Nouris said “the overwhelming majority” of migrants who arrived at ethnically split Cyprus in the last year hail from sub-Saharan African countries with which the European Union doesn’t have such send-back agreements. Nouris said he would possibly travel to Paris next month to thrash out details of such potential agreements and other migration issues.

Cyprus says it has the highest number of first-time asylum applications among all 27 EU members relative to its population of 1.1 million and its reception system has reached a breaking point.

Around 80% of all migrants enter Cyprus from its breakaway north and then cross a porous, U.N.-controlled buffer zone to seek asylum in the internationally recognized south.

Nouris said 15,000 migrants who have had their asylum applications rejected can’t be deported from Cyprus because of the lack of any EU send-back agreements with their countries.

Cyprus this week signed a 27.5 million euro ($31.8 million) deal with Israel for the installation of a camera system to monitor the 180-kilometer long buffer zone.

The Cypriot government claims that Turkey systematically forwards asylum-seekers to the Mediterranean island’s Turkish Cypriot north so that they pressure the island’s southern, U.N.-recognized government.

Cyprus was split in 1974 when Turkey invaded following a coup by supporters of union with Greece. Only Turkey recognizes a Turkish Cypriot declaration of independence in the north. Decades of reunification talks have got nowhere.

Follow all AP stories on global migration issues at https://apnews.com/hub/migration. 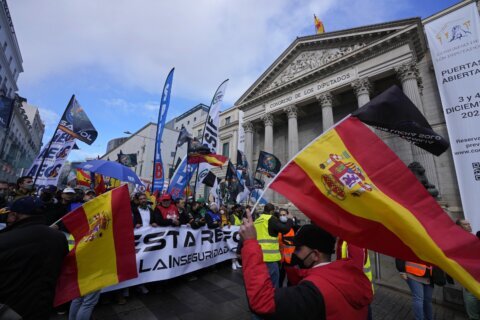