LONDON (AP) — Britain’s government said Thursday it will allow up to 800 more foreign butchers work in the U.K. on temporary visas, after farmers said a labor shortage in meat processing has caused them to cull thousands of healthy pigs.

Earlier, the pork industry warned that up to 150,000 pigs could be destroyed because a lack of abattoir butchers led to a backlog of pigs ready for slaughter, and farmers were struggling to find space for the animals. It said farmers already had to kill over 6,000 healthy pigs.

The Department of Transport said the temporary visas will allow butchers to travel and work in the U.K. for six months. Officials stressed that the measure is not a long-term solution and that businesses need to pay higher wages and invest in better technology and training for domestic workers instead of relying on overseas labor.

The government also said there will be funding for additional meat storage and other measures to support the industry.

Environment Secretary George Eustice said the measures were in response to a “unique range of pressures on the pig sector over the recent months,” including the coronavirus pandemic and the temporary suspension of approval to export to China for some U.K. pork suppliers.

Tom Bradshaw, vice president of the National Farming Union, said the measures were a “step in the right direction.” He added that it was critical to get overseas butchers to the U.K. as soon as possible.

Britain’s government has been facing a wider labor shortage and supply chain problems brought partly by the pandemic and Britain’s exit from the European Union. Brexit ended the right of EU citizens to live and work visa-free in Britain and has left growing gaps in the economy.

A critical shortage of truck drivers recently led to a fuel supply crisis that left pumps across the country empty for days and traffic chaos as long lines formed outside gas stations. The lack of drivers has also led to gaps on supermarket shelves and logjams at container ports. Retailers have warned that there could be a shortage of turkeys and toys at Christmas.

Officials have already announced that they will issue 5,500 temporary visas for poultry workers and another 5,000 for truck drivers in an attempt to stave off a supply crisis in the run-up to Christmas. 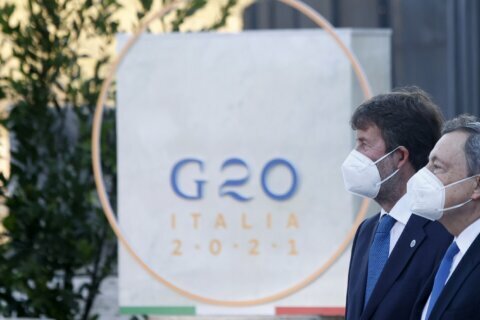