BELGRADE, Serbia (AP) — Nearly a decade ago, an encounter with an Iranian family inspired Serbian lawyer Nikola Kovacevic to dedicate his career to the rights of refugees and asylum-seekers.

Now Kovacevic says his quest has become more important than ever amid soaring anti-immigrant sentiment and populism in Europe.

On Thursday, the 32-year-old human rights lawyer from Belgrade received at a ceremony in the Serbian capital a prestigious award for Europe from the U.N. refugee agency for assisting scores of people who fled their homes, including those being sent back and forth over the borders in the region.

The first winner of UNHCR’s regional Nansen Refugee Award from Serbia and the Balkans, Kovacevic told The Associated Press that refugee rights relate to the very core of European values.

“If we lose the fight for the legacy of the refugee convention, which was designed for us — Europeans — in the second World War, what’s going to a happen next?” Kovacevic asked. “Because, you know, there is this old saying: ‘Everybody can come in a situation to become a refugee.”

Closed borders and the the practice of collective expulsions, both in the Balkan region and wider in Europe, have undermined the existing layers of protection that were designed for refugees, he explained. People trying to flee their homelands are often simply sent back without countries “even trying to see what is going to happen to them.”

“Today, as we speak, dozens and dozens of Afghanis are stuck in a no-man’s land between Poland and Belarus,” he said of the latest European migration hot spot, where Poland alleges that Belarus is taking money from vulnerable migrants and sending them into Poland to destabilize the whole 27-nation European Union.

“To access inclusion is to access territory, to say: ’Hello Mr. Policeman, Mr. Border Police Officer, I am here. I am from Afghanistan, I want to access my rights,” he said.

While the global Nansen award this year went to a humanitarian organization in Yemen, the choice of Kovacevic as the regional winner in Europe has underscored the importance of the Balkans as a key route in the flow of people desperate to reach Western Europe.

Thousands of migrants make dangerous journeys every day — especially those who try to flee from Libya across the Mediterranean Sea — and many have faced repeated pushbacks from authorities and even violence while trying to reach Western Europe. Some of Kovacevic’s clients have suffered serious injuries during such expulsions from one country to another.

Over the years, Kovacevic has handled numerous cases that ranged from a Kurdish activist’s extradition to Turkey to about one-third of all the granted protection requests in Serbia. He still remembers clearly his first visit to an asylum center in Serbia in 2012 and the family from Iran he met there.

“If you get this personal connection with the people who lost everything, who speak to you … (the) exchange of something, of energy, or gratitude, of this feeling of humanity, that’s an unbelievable feeling,” said Kovacevic.

In announcing this year’s winner, the UNHCR said Kovacevic has shown exceptional dedication and contributed to better asylum procedures in Serbia. He has helped his clients find shelter, jobs and access education and medical assistance.

“His determination instigated their hope for better life,” said UNHCR.

Last year Kovacevic scored a landmark victory for refugees at Serbia’s Constitutional Court, which acknowledged that the Serbian police had unlawfully expelled a group of people from Afghanistan — including 9 children — to Bulgaria, and ordered the government to pay compensation to each of them.

The ruling was seen as a rare official confirmation that countries in Europe are condoning and conducting pushbacks that violate both the EU and international laws, which ban the forcible return of people to other countries without looking into their individual circumstances or allowing them to apply for asylum.

Kovacevic also has helped colleagues in Hungary bring to court there the cases of the first two migrants who were expelled to Serbia after Hungarian Prime Minister Viktor Orban’s populist government put up a barbed wire fence on the border in 2015 to stop migrants from coming in.

Anti-immigration propaganda “spreads like a fire,” he warned, adding that human rights activists face a daunting task in countering misinformation.

The Serbian lawyer had a message to all the people who consider migrants and refugees a danger to their societies.

“How would they feel if they knew that their wives and children are standing before the barbed wire fence, where there are border police officers with sticks, with pepper spray, with dogs, who are ready to beat them up and send them back to the place where there is danger, where there is no safety?” he asked.

“In the end it’s very simple: Just try to put yourself in this kind of situation,” he said.

Read all AP stories on global migration at https://apnews.com/hub/migration. 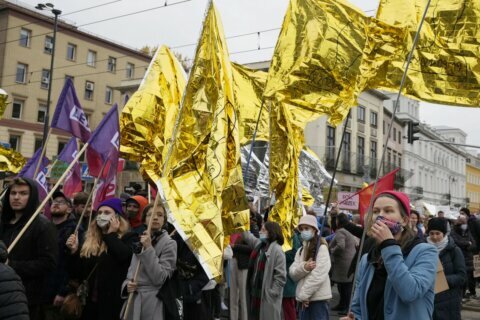