BERLIN (AP) — Germany and Denmark have brought home 11 women and 37 children from a camp in northeastern Syria where suspected Islamic State group members have been held, the German foreign ministry said Thursday.

Germany repatriated 23 children and their eight mothers from the Roj camp on Wednesday evening, while Denmark brought back 14 children and three women.

German Foreign Minister Heiko Maas said that the children bear no responsibility for their situation and “it is right that we do everything to make possible for them a life in safety and a good environment.”

“The mothers will have to answer to criminal justice for their actions,” Maas added in a statement.

He thanked Kurdish authorities in Syria, Denmark and “our American partners, who provided logistical support.”

German federal prosecutors said three women — whom they identified only as Solale M., Romiena S. and Verena M. in line with local privacy rules — were arrested on arrival at Frankfurt airport. They were accused of membership in a foreign terror organization, taking the children with them against their fathers’ will and violations of their duties of care and education.

Denmark’s National Board of Social Service said the Danish group arrived early Thursday at the Karup air base in the west of the country. The three women were arrested. They face preliminary charges of promoting terrorism and violating laws on traveling to and staying in a conflict zone. 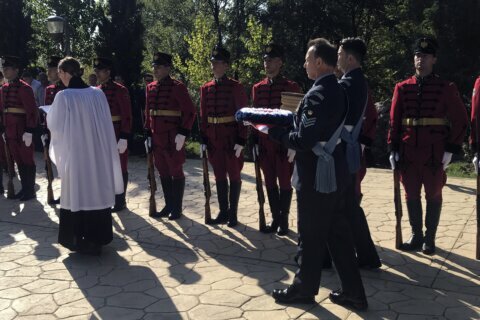