Speaking after prayers in Istanbul, Erdogan said he and Biden had failed to bridge their differences at a meeting during his visit to New York for the UN General Assembly this week.

“In the discussions with Mr. Biden that I’d been anticipating, there wasn’t the desired outcome. … As two NATO countries, we need to be at a different point,” he told journalists.

Erdogan went on to criticize U.S. support for Kurdish militants in Syria who were instrumental in fighting the Islamic State group. Ankara considers them terrorists due to their links to the Kurdistan Workers’ Party, or PKK, which has waged a 37-year insurgency against Turkey. Turkey has a large and restive Kurdish ethnic minority. The PKK is listed as a terrorist organization by the U.S. and EU.

“America is not fighting terrorist organizations enough, it is giving them a lot of weapons and equipment,” he said.

Erdogan is due to meet Russian President Vladimir Putin in the Black Sea resort of Sochi on Sept. 29, where the leaders will concentrate on the situation in Syria.

Russia is the main ally of the Syrian government while Turkey supports groups that have fought to unseat President Bashar Assad. However, Russian and Turkish troops have cooperated in Idlib, the final holdout of rebel forces, and in seeking a political solution in the war-torn country.

Erdogan said he would seek to take relations with Moscow “much further” when he meets Putin. “We strive to further our bilateral relations with Russia,” he added.

Ties between the U.S. and Turkey have been frayed for several years. They deteriorated further two years ago when Ankara bought a Russian missile defense system. The purchase led to Turkey being kicked off the U.S.-led F-35 stealth fighter aircraft project and to U.S. sanctions against leading Turkish defense industry officials.

Before leaving New York on Thursday, Erdogan had raised the F-35 issue with journalists, warning the current course of U.S.-Turkey relations “does not bode well.” 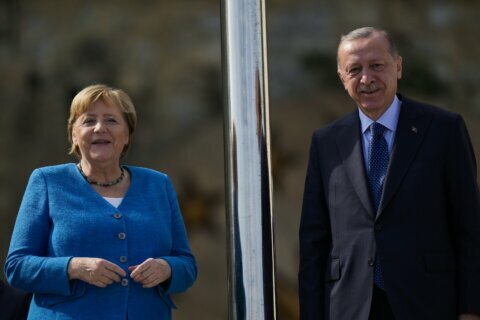