GENEVA (AP) — Voters in Switzerland will decide Sunday whether to allow same-sex marriages in the rich Alpine country, one of the few in Western Europe where gay and lesbian couples do not already have the right to wed.

Switzerland has authorized same-sex civil partnerships since 2007. The Swiss government, which has endorsed the “Marriage for All” referendum, says passage would put same-sex partners on equal legal footing with heterosexual couples by allowing them to adopt children together and to sponsor a spouse for citizenship.

Opponents have argued that replacing civil partnerships with full marriage rights somehow would undermine families based on a union between one man and one woman.

Polls suggest the referendum, which also would allow lesbian couples to utilize regulated sperm donation, is set to pass. The most recent polls have suggested it has about 60% support, but the margin has narrowed as the vote has gotten closer.

The campaign has been rife with allegations of unfair tactics, with the opposing sides decrying the ripping down of posters, LGBT hotlines getting flooded with complaints, hostile e-mails and shouted insults against campaigners, and efforts to silence opposing views.

Switzerland, which has a population of 8.5 million and international prestige due to Geneva’s role as the home of the United Nations in Europe, is traditionally conservative and only extended the right to vote to all its women in 1990.

Depending on the geopolitical definition used to describe Western Europe, the country is the only, one of two or part of a handful of nations in the region that don’t recognize same-sex marriages. Greece, Italy and the microstates of Andorra, Monaco and San Marino also among the places that only allow local couples to marry if they are a man and a woman.

Most countries in central and Eastern Europe do not allow wedlock involving two men or two women.

Even if the Swiss referendum passes, supporters say it would be months before same-sex couples could get married, due mainly to administrative and legislative procedures.

Unlike in many other European countries, where elected lawmakers legalized same-sex marriages, Swiss voters are deciding because opponents qualified a public referendum on the matter after the national parliament approved legislation to give gay and lesbian couples full marriage rights. A similar referendum in Ireland in 2015 overwhelmingly passed.

Switzerland’s referendum process give voters a direct say in policymaking, and most voting is done through mail-in balloting.

The Swiss government says about 700 same-sex couples each year form civil unions, but that they don’t enjoy equal rights. By allowing marriage, it would let same-sex couples adopt children that are not those of either spouse; lesbian couples could gain access to donated sperm; and foreign-born spouses of Swiss nationals in same-sex relationships would get faster-track access to Swiss nationality.

“This is a fight that goes back 20 years,” said Matthias Erhardt, a Geneva City Council member who supports making same-sex marriages legal in Switzerland. “I think it would be a step toward modernity.”

“For us LGB people — lesbians, gays and bisexuals — it’s our entire life, our life plan, that’s at stake,” Erhardt said. Some transgender individuals identify heterosexual, while others consider themselves gay, lesbian or bisexual.

Opponents say marriages should only be legally recognized when they are between a man and a woman, arguing that extending the institution to same-sex partners would enshrine the absence of fathers into law.

“If the law is adopted, we are going to introduce into Swiss civil law a new institution: that of the child without a father,” Yves Nidegger, a national lawmaker from the right-wing, populist Swiss People’s Party, said.

“Two women or two men who want to conceive a child, even if they love each other very, very very much, that’s just not the way children are created,” Nidegger said.

LGBT rights advocacy group ILGA-Europe places Switzerland 22nd – after Slovenia and Bosnia – in its 2021 ranking of 49 European countries on their legal and policy practices. The ranking takes into account a variety of factors including anti-LGBT discrimination, hate crimes and speech, and legal recognition of transgender people.

Another issue on Sunday’s ballot is a measure spearheaded by left-wing groups to raise taxes on returns from investments and capital such as dividends or income from rental properties in Switzerland as a way to ensure better redistribution and fairer taxation.

Polls suggest that referendum is unlikely to pass in a country known for its vibrant financial sector and relatively low taxes, and as a haven for many of the world’s richest people. 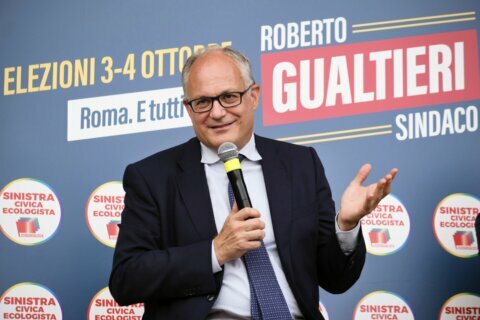 Center-left wins in Rome, elsewhere in blow to Italy’s right