Coronavirus News: US to OK mix-and-match boosters | Celebrating homecoming | Va. adds dashboard for children | Local cases of COVID-19 | How many in DC region are vaccinated?
Home » Europe News » Nobody hurt but much…

Lava continued to flow slowly from a volcano that erupted in Spain’s Canary Islands off northwest Africa, but the head of the regional government said Monday he expects no injuries to people in the area after some 5,000 were evacuated.
Listen now to WTOP News WTOP.com | Alexa | Google Home | WTOP App | 103.5 FM
(1/21) 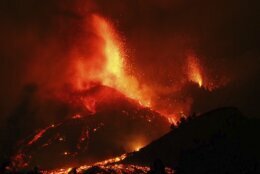 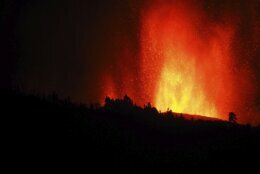 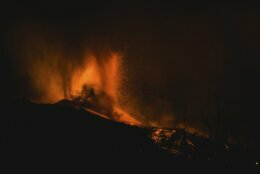 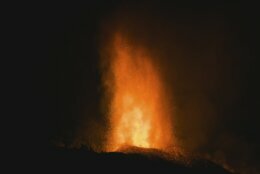 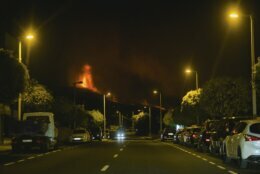 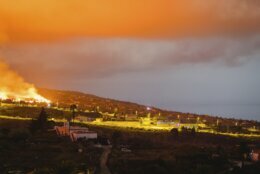 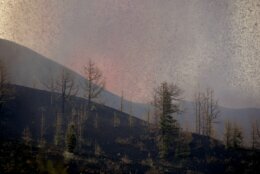 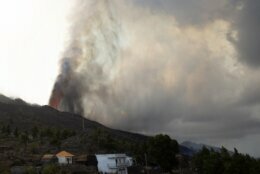 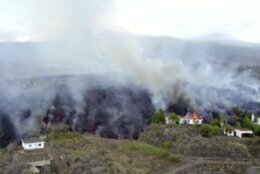 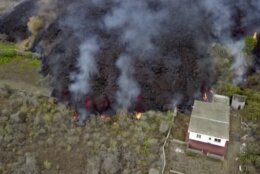 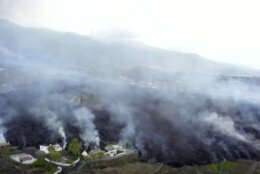 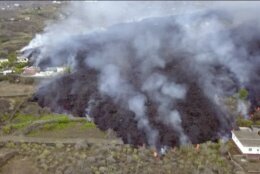 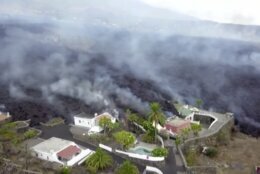 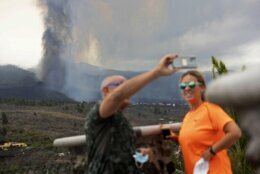 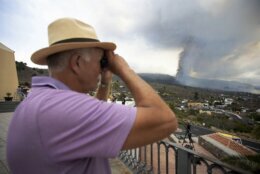 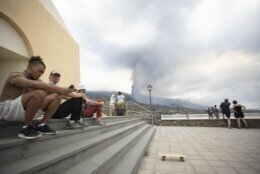 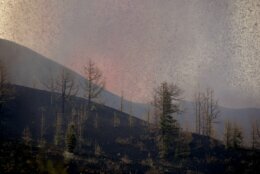 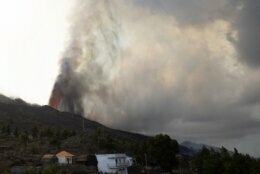 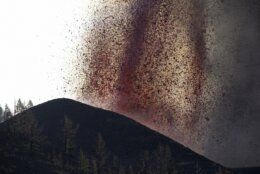 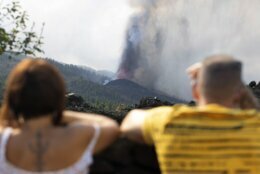 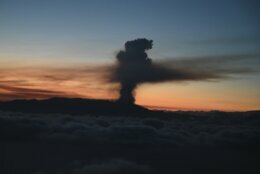 LA LAGUNA, Spain (AP) — Giant rivers of lava tumbled slowly but relentlessly toward the sea Monday after a volcano erupted on a Spanish island off northwest Africa, with prompt evacuations helping to avoid casualties.

Long fingers of fiery red lava slid down hillsides with white smoke billowing from their leading edges as they swallowed up houses, gardens and swimming pools in a trail of destruction across the verdant countryside.

An incessant rumble, like that of an airplane passing overhead, came from the nearby Cumbre Vieja ridge where the eruption occurred Sunday afternoon when two fissures started belching bright red magma into the air and set the glowing lava rivers in motion.

Scientists had been monitoring the area on the island of Palma, in the volcanic Canary Islands, in recent days amid thousands of mostly small earthquakes, and authorities quickly evacuated around 5,500 people.

The lava destroyed more than 100 homes on the hillsides. One of them belonged to German couple Matthias and Anette Fuchs, 65 and 64 respectively.

They said they fell in love with the house the moment they first saw it. Built in the islands’ traditional architectural style using volcanic materials from previous eruptions, the couple had been improving it over nearly four decades.

“It was a special place, we saw it once and we fell in love,” Anette Fuchs told The Associated Press, recounting how the couple hosted large dinners for friends and visiting relatives. “It was a paradise.”

The lava was moving at 700 meters (2,300 feet) per hour, according to the Canary Islands Volcanology Institute. Officials said they expected it to reach the Atlantic Ocean around sunset, where it could cause explosions and produce clouds of acidic steam. Scientists monitoring the lava measured it at more than 1,000 C (more than 1,800 F).

Authorities on La Palma, where people largely live from farming, told people in the wide areas where volcanic ash was falling to stay indoors with their doors and windows closed.

Scientists say the lava flows could last for weeks or months, but the immediate danger to local people appeared to be over.

Daniel Álvarez, a bar owner in Las Manchas, one of the closest villages to the volcano, was evacuated with his family on Sunday and was staying at the El Fuerte military barracks with some other 300 evacuees. He didn’t know whether the lava had consumed his home.

“For now,” he said, “it seems like it’s safe, but the lava is opening many paths. We have all of our lives inside (our house). We would need to start over again.”

“There will be considerable material damage,” Torres told SER radio. “We hope there won’t be any personal injuries.”

Late Monday, lava began flowing from a new fissure that opened on the volcano following an earthquake that shook the ridges of Cumbre Vieja, the Canary Islands Volcanology Institute. Authorities then ordered the evacuation of another neighborhood and closed some roads. It was not immediately clear how many people were involved in the new evacuation.

He praised scientists for monitoring the eruption, saying their work was “fundamental” in avoiding casualties, and promised that his government would help local people rebuild their lives.

The Canary Islands Volcanology Institute reported the initial eruption shortly after 3 p.m. Sunday near the southern end of the island, which saw its last eruption in 1971.

A 4.2-magnitude quake was recorded before the eruption, which took place in an area known as Cabeza de Vaca on the western slope as the ridge descends to the coast.

La Palma, with a population of 85,000, is one of eight Canary Islands. At their nearest point, the islands are 100 kilometers (60 miles) from Morocco.

A previous version of this story was corrected to show that Mariano Hernández is the head of the island’s government, not the mayor.