BUDAPEST, Hungary (AP) — The Hungarian government has offered to assist Poland in conducting border surveillance on its eastern border with Belarus in an effort to deter migrants from entering the country illegally, Hungary’s president said Thursday.

A serious migration crisis has developed on the Polish-Belarusian border, and events in Afghanistan “are likely to put even greater migration pressure on Poland in the future,” Hungarian President Janos Ader said at a joint press conference in Budapest with his Polish counterpart Andrzej Duda.

Hungary will offer its help in surveillance and maintaining a 370-kilometer (230-mile)-long fence which is currently under construction along the border, Ader said. The country will also share experiences with its own border barrier that it began erecting in 2015 during that year’s influx of migrants into Europe.

Poland, a strong ally of Hungary’s right-wing government, last week declared a state of emergency at a 3-kilometer (nearly 2-mile) strip of land along its border with Belarus amid increasing migration pressure.

European leaders, including those from Poland and the Baltic states of Latvia and Lithuania, have accused authoritarian Belarusian President Alexander Lukashenko of sending migrants across their borders to destabilize the EU in revenge for sanctions it has imposed on his Kremlin-backed regime.

At the press conference Thursday, Duda thanked Ader for the offer of assistance at the border, adding that Belarus had been “taking hybrid measures, pushing migrants into Poland.”

Duda also met with Hungarian Prime Minister Viktor Orban, who assured him of Hungary’s full support over what Orban called an “attack” on Poland by the EU’s executive branch after it moved to impose financial penalties on the country to ensure compliance with EU law.

The European Commission on Tuesday said it wants the European Court of Justice to impose daily fines against the government in Warsaw in a long-running dispute over Poland’s judicial system.

The conflict comes as both Hungary and Poland face other financial penalties from the EU over concerns that their nationalist governments are not complying with EU rule of law standards. 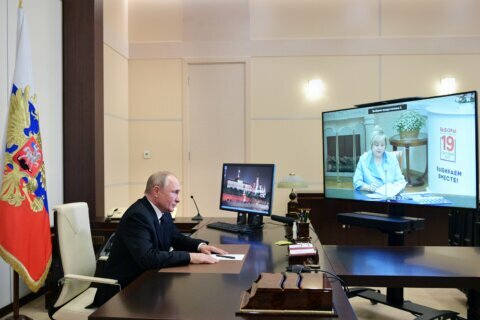