A fire engulfed dozens of houses in the village of Byas-Kuel, and all village residents were evacuated, according to the local task force dealing with the emergency.

Fires also burned close to the villages of Kytyl-Dyura, Sinsk and Yedyai, and the local government chief, Andrei Tarasenko, said that a total of 12 settlements are currently under threat. High winds exacerbated the danger of flames spreading quickly.

In the village of Sangar, emergency teams were taking urgent steps to protect a threatened fuel supply facility. Emergency officials prepared to engage a heavy-lift plane to douse the flames.

In recent years, Russia has recorded high temperatures that many scientists regard as a result of climate change. The hot weather coupled with the neglect of fire safety rules has caused a growing number of fires.

Experts also blame the worsening situation with fires on a 2007 decision to disband a federal aviation network tasked to spot and combat fires and turn its assets to regional authorities. The much-criticized move led to the force’s rapid decline.

On Friday, Russian President Vladimir Putin boarded a helicopter to overfly an area that was affected by wildfires in the Chelyabinsk region in the Ural Mountains. Putin later chaired a meeting with top officials to discuss the situation.

Emergencies Minister Yevgeny Zinichev reported that over 11,000 forest fires have ravaged an area of more than 6 million hectares (14.8 million acres) so far this year. Nearly 90,000 emergency workers were engaged in fighting wildfires.

Yakutia government head Aysen Nikolayev said acrid smoke from wildfires has engulfed many cities and villages, including Mirnyi, where heavy firefighting planes are based. The planes have been grounded since July 29, forcing authorities to rely on helicopters and ground personnel, he said.

“We haven’t had practically any rains for 2 1/2 months, with abnormally hot and dry weather and high winds,” Nikolayev said. “In some regions, people have suffered serious discomfort because of thick smoke.” 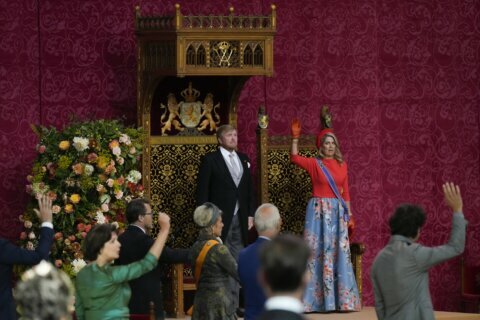