LONDON (AP) — British Defense Secretary Ben Wallace held back tears Monday as he conceded that Britain was unlikely to be able to evacuate all its Afghan allies from Kabul.

Wallace, who served as a captain in the Scots Guard before entering politics in the late 1990s, has in recent days voiced regret at the sudden seizure of Afghanistan by Taliban militants. He has openly worried about the potential return of al- Qaida and instability in Afghanistan and criticized the deal then-U.S. President Donald Trump signed with the Taliban in February 2020 that limited direct military action against the insurgents.

But it was during his morning media round on Monday, the day after Kabul fell, that Wallace briefly offered a glimpse into the strain he has been under.

Speaking via webcam on LBC Radio, Wallace’s voice started shaking when he began describing his regret at Britain’s likely inability to get all eligible Afghans back to the U.K. in coming days.

When asked why he was so personal to him, Wallace’s voice started to quiver some more.

“Because I’m a soldier,” he said. “Because it’s sad and the West has done what it’s done and we have to do our very best to get people out and stand by our obligations and 20 years of sacrifice — is what it is.”

Wallace last week authorized the deployment of another 600 British troops to Afghanistan to help in the evacuation of the 4,000 or so U.K. nationals and Afghan allies who have helped over the past 20 years. The first flight of British nationals and embassy staff arrived at RAF Brize Norton, around 75 miles (120 kilometers) northwest of London, on Sunday night.

Without explicitly criticizing the decision of U.S. President Joe Biden to announce the withdrawal of all U.S. troops from Afghanistan on Sept. 11, the 20th anniversary of the attacks on New York and Washington D.C., Wallace’s words suggested that he thinks a different path could have been trodden.

British forces played a pivotal role in Afghanistan over the past two decades and suffered 457 casualties, mainly in the southern province of Helmand. In addition to their combat role, they helped train Afghan army troops and supported a wide range of projects to improve education, particularly for girls, health care, economic growth and local governance.

Iraqi migrant dies near Belarus border, death toll up to 5 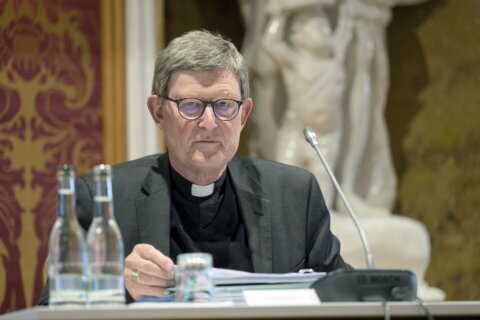