LONDON (AP) — U.K. troops have arrived in Kabul to help evacuate any British citizens and employees who are from Afghanistan, the Defense Ministry said Sunday, as British lawmakers were called back to Parliament from their summer break to discuss the worsening situation in Afghanistan.

Authorities said Parliament will be recalled for one day on Wednesday to debate the government’s response to the crisis. Prime Minister Boris Johnson also met with his Cabinet’s emergency committee Sunday as the Taliban advanced into Kabul, the Afghan capital.

After the meeting, Johnson said the priority is to get British citizens, as well as Afghans who helped U.K. forces in Afghanistan over the past 20 years, out “as fast as we can” in the next few days.

“The ambassador is working round the clock, has been there in the airport to help process the applications,” he told Sky News. “We certainly have the means at the moment to get them out … It’s just a question of making sure that they’re able to do it over the next few days.”

The Sunday Telegraph reported that the U.K.’s ambassador to Afghanistan, Laurie Bristow, would be airlifted out of the country by Monday evening. The Foreign Office declined to comment on that report.

Like other NATO allies, Britain began withdrawing its remaining troops from Afghanistan after U.S. President Joe Biden announced in April that the U.S. was leaving by Sept. 11, the 20th anniversary of the Sept.11, 2001 attacks.

Many British lawmakers have criticized Johnson’s Conservative government of abandoning Afghanistan. Conservative Tom Tugendhat, chair of the Foreign Affairs Committee, said the pullout from Afghanistan was Britain’s worst foreign policy disaster since the U.K.’s failed invasion of Egypt in 1956.

Keir Starmer, leader of the opposition Labour Party, has urged the government to explain what it planned to do to avert a looming humanitarian crisis in Afghanistan and prevent it from again becoming a base for international terrorism.

Johnson said Sunday that Britain will work on that with allies at the United Nations Security Council and in NATO, and ensure that no country recognizes the Taliban.

“I think it is very important that the West should work collectively to get over to that new government — be it by the Taliban or anybody else — that nobody wants Afghanistan once again to be a breeding ground for terror,” he said.

Writing in the Sunday Telegraph, Defense Secretary Ben Wallace maintained “we have not betrayed Afghanistan.” He said he had approached other NATO allies about taking the place of the U.S. mission, but none was willing to do so, and Britain could not “go it alone.”

“It would be arrogant to think we could solve Afghanistan unilaterally,” he said. 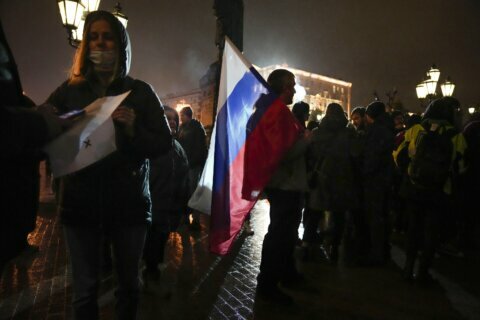