ROME (AP) — The governor of the area including Italy’s capital, Rome, sought on Monday to assure residents that a powerful hacking intrusion into the region’s website, into its second day, won’t interrupt COVID-19 vaccinations.

But until the hacking is resolved, residents of the region won’t be able to sign up via the region’s website, to receive the vaccine. “The reservation system is temporarily suspended,” he said.

The governor described the attack as “probably the most serious one that ever happened on national territory.”

“We are defending our community from these criminal and terroristic attacks.” Zingaretti vowed, without providing details.

The hacking was under investigation by intelligence and cybersecurity experts.

Zingaretti dismissed as unfounded reports that a ransom demand had been made, and added that the attack was launched from abroad. He said that a second hacking attempt, launched about two hours after the first one shortly after midnight Sunday, was successfully fought off.

Existing appointments for a first or second dose of the vaccine through Aug. 13 in the region will be honored, Zingaretti said.

The hacking “won’t in any way slow down the vaccination process,’” Zingaretti pledged.

Some 70% of Lazio residents who are 12 or over and eligible to receive the COVID-19 vaccine are fully vaccinated. Nationwide, that figure is 60%.

Lazio Health Commissioner Alessio D’Amato said some 50,000 COVID-19 vaccines were administered on Sunday, with the only repercussion being a slowdown in registering the data, since all information had to be recorded manually.

On Friday, the nation begins its so-called “Green Pass” system. Under those government rules, people in Italy must show certification that they have had a least one vaccine dose, or tested negative within 48 hours, or have recovered from COVID-19 in the last six months if they want to dine indoors, enter a cinema, museum or gym or attend a concert or other event drawing a crowd.

With many in Italy anxious to get their “Green Passes,” Lazio authorities said at most the hacking would cause a 24-hour delay before vaccine injections will be registered.

There was concern other local governments in Italy might fall prey to a cybersecurity attack.

“Until today we invested a lot in security, but what happened in Lazio worries me,” said Tuscany’s regional governor, Eugenio Giani.

“How could we have, starting from January, been able to administer 4.1 million doses of vaccine without an internet network” operating in Tuscany, he asked. 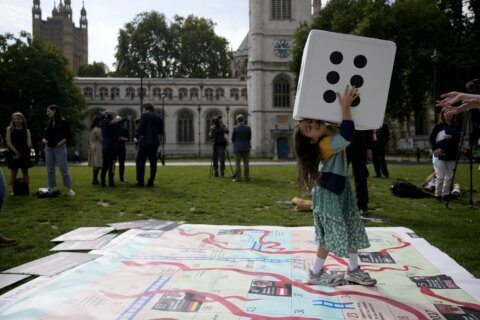