VILNIUS, Lithuania (AP) — An influx of migrants from Iraq and elsewhere into Lithuania allegedly abetted by neighboring Belarus appears to have stopped, but with a pile of asylum applications to process and local communities angry about nearby migrant camps, the Lithuanian government faces an unfamiliar challenge.

The U.N. refugee agency’s representative for the Baltic region said Friday that while the “emergency phase” of the mass arrivals seems to be over, Lithuania must now focus on the wellbeing of the people held in immigration detention centers and on assessing their claims for international protection.

So far this year, more than 4,000 asylum-seekers from 40 countries, most of them Iraqi, have illegally crossed from Belarus into Lithuania. That’s 50 times more than during all of 2020.

UNHCR Representative Henrik M. Nordentoft said the influx was a “completely unique situation” for Lithuania, a European Union member with a population just under 3 million.

“So, in a way, there were no standby capacities to quickly mobilize,” Nordentoft told The Associated Press, nonetheless voicing confidence that Lithuanian authorities could handle the situation. “I sense a drive, a declaration, a will.”

“It is a bit of a race against time in terms of (the coming) winter and the cold months,” he said.

Interior Minister Agne Bilotaite said Friday that some 1,500 asylum requests are being processed, and a few people have accepted voluntary repatriation to their home countries. Lithuania built temporary tent camps to house migrants and also is erecting a border fence.

Lithuania, like fellow EU members Latvia, Estonia and Poland, sees the entrance of so many migrants as resulting from retaliation by Belarus’ authoritarian president, Alexander Lukashenko. The EU imposed increased sanctions after Belarus forced a Lithuania-bound passenger plane to land in Minsk in May and authorities arrested a dissident Belarusian journalist on board.

The recent border-crossers in Lithuania “include certain people (who) may have more of a migrant profile than a refugee profile,” Nordentoft said.

Since Lukashenko’s reelection to a sixth term in an August 2020 vote that the West had denounced as rigged, the longtime leader has cracked down on opposition protests in his country. Many Belarusians have sought shelter abroad; opposition leader Sviatlana Tsikhanouskaya fled to Lithuania days after the dispute presidential election.

Poland says its border is also under control following reports of Iraqis and Afghans seeking to enter from Belarus. Border guards have detained nearly 900 people this year trying to slip in from the neighboring country, according to Polish media – up from 122 last year.

Associated Press interviews with people in Lithuania’s immigration camps over several weeks highlight their diverse backgrounds and reasons for attempting to enter the EU.

Juel Fomejuel came from Cameroon, where conflict has killed thousands and displaced at least 700,000 people. “I just pray that EU give me a protection,” he told AP, saying that going back home “is like going back inside the fire.”

Tamar Heidar, a 22-year-old Iraqi, said he sought a better life in the EU by transiting through Belarus.

“Belarus not using me, I don’t not care about Belarus,” he said. “All these people here, they are doing this to get a better life. It’s not because Belarus is using me. I’m using Belarus.”

The countries bordering Belarus have denounced the crossings as a “hybrid war,” a source of concern for the UNHCR’s Nordentoft.

“Hybrid war involves the thoughts of soldiers, weapons,” he said. “It was very important for the population not to see the persons (as) threats, but also in a way as victims.”

Nevertheless, tensions have increased in recent weeks among communities near migrant camps, resulting in sometimes violent protests. Groups blocked roads for delivery vehicles and were removed after clashes with riot police. Residents of areas where camps were planned held demonstrations outside the Lithuanian government building in Vilnius and in several local municipalities.

On Wednesday evening, the AP followed a small group of villagers from Rudninkai near the border as they patrolled the streets in high visibility jackets in search of escaped camp residents. Earlier, 20 migrants who had fled were detained by police the same night. Another 28 escaped another camp, police said Friday.

“Two weeks ago, Rudninkai was very quiet. But when a huge amount of migrants arrived, this calm was disturbed. These people have a completely different culture,” local resident Kristina Slovenska said. “We are worried about our safety.” 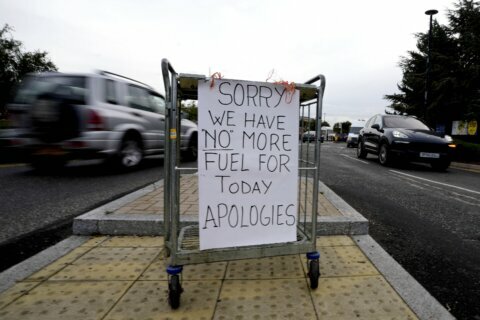 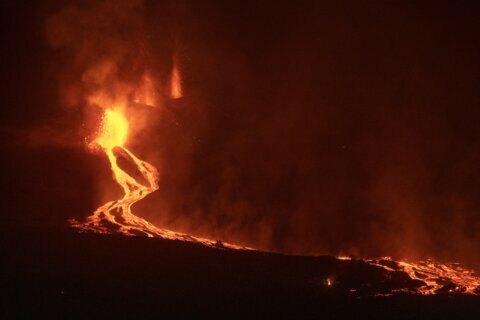 Lava from Spanish island volcano rolls slowly toward the sea