VAN, Turkey (AP) — Plain concrete gravestones painted with a number and the word “Afghan” are all that mark the final resting places of dozens of unidentified migrants who died trying to enter Turkey through the rugged mountainous border with Iran.

Hundreds of people escaping conflict or poverty, mostly from Afghanistan but also from other countries in the region, have died over the years risking the perilous crossing. Some succumbed after exposure to extreme weather conditions, others died in accidents as their smugglers tried to evade authorities in trucks and boats crammed with people.

Those whose identities remain unknown are buried in dirt lots in special sections of cemeteries around Turkey’s eastern Van province, which borders Iran. Their grave markers bear a number corresponding with their forensic file and — if it’s known — their nationality or date of death.

“During the passage of irregular migrants … there may be those who freeze at the border line in winter. There may be people who drown in a stream. From time to time, there are people who lose their lives in traffic accidents,” Van’s Gov. Mehmet Emin Bilmez told The Associated Press.

Following autopsies to determine the cause of death and DNA tests, the bodies are kept in the morgue for a fortnight in the hope that a relative or an embassy will claim them.

“If no one takes responsibility for them within 15 days, then the metropolitan municipality takes the body from the morgue, buries it in the cemetery (for the unidentified) and gives it a number,” Bilmez explained.

The migrants’ biggest enemy on their trek through the treacherous gateway to the West is the weather. Winter temperatures in Van province’s vast highlands can dip as low as minus 26.9 Celsius (minus 16.42 Fahrenheit). According to local media, Turkish authorities recovered several bodies in the region this spring as the ice and snow began to melt.

Other hazards include hunger, thirst, and robbers who threaten or kill migrants if they don’t give up their possessions on the spot, according to numerous migrant testimonies to the AP.

Murad Majidi, a 17-year-old from northern Afghanistan’s Jawzjan province, who left the country before the Taliban takeover, says he feels lucky to be alive. He fell into a ditch and broke a limb trying to evade gunfire from Iranian police at the border.

Other migrants in his group escaped, but he was caught by Turkish authorities and sent to a deportation center.

“I was going to experience the fate of those (other migrants) that died in traffic accidents, froze or died … I survived (the fall) but broke my leg.” Majidi said at the center where he was registered and treated for his injuries.

At the special section of Karsiyaka cemetery, in Van province’s main city of Van, 12 graves belong to migrants whose minibus overturned and caught fire on a road last month. Some 20 other migrants were injured in that accident.

Last year, about 60 migrants drowned when a boat sank in Lake Van in a storm. Their smuggler had selected the lake crossing to avoid police and gendarmerie check-points on roads in the region.

“They freeze in the cold weather, in snow. Buses crash, people die,” said an Afghan who identified himself as Mustafa Aydin. He was caught crossing the border with Iran and is currently in a deportation center in Van city.

“They come here to work, to send money to their families,” he said. “Because there are no jobs in Afghanistan.” 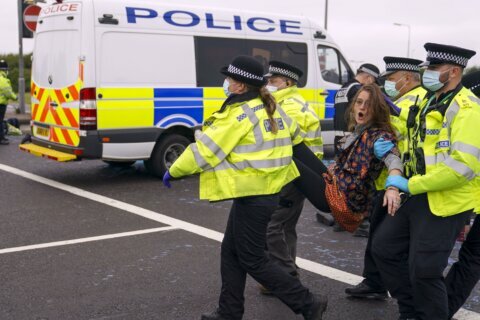