LONDON (AP) — Lily Parr, whose record-setting career was overlooked when the bosses of English soccer shunned the women’s game, is now the focus of a new permanent exhibition at the National Football Museum in Manchester.

The display is part of an effort to mark the 100th anniversary of the Football Association’s decision to ban women from playing matches at the stadiums of Football League clubs because the game was considered “unsuitable for females.” The ruling wasn’t lifted until 1971.

“The display tells of the girls’ defiance to play the game they loved while the powers-that-be tried to ban them,’’ said Belinda Scarlett, curator of women’s soccer. “Lily is one of the most important figures in world football but is far from a household name. We hope to redress that balance with fresh attention on the women who defied the ban and inspired future generations of girls to play football.”

The exhibition features previously unseen photographs from the 1930s that belonged to Lizzy Ashcroft, a friend and teammate of Parr’s. Ashcroft’s grandson found the photos in a suitcase in the loft of a relative’s house and donated them to the museum.

Women’s soccer in England dates to the 1890s, but it ballooned in popularity during World War I when women flooded into munitions factories as men were called up to fight. Many of the factories, including Dick, Kerr & Co., created women’s teams that played games to raise money for charity.

Parr joined Dick Kerr Ladies, the top women’s team in England, as a teenager and starred in a game on Dec. 26, 1920, that drew 53,000 spectators to Goodison Park in Liverpool. She played for the club, later renamed Preston Ladies, until she retired in 1951 at the age of 46.

After working at the munitions factory during the war, Parr trained as a nurse. She was inducted into the English Football Hall of fame in 2002. 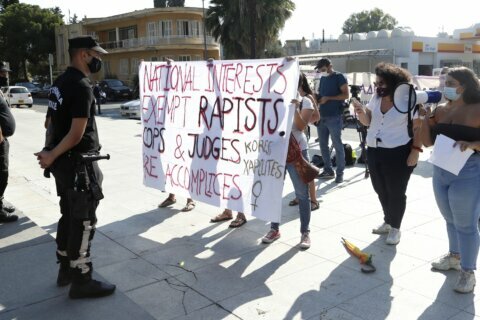 Paris’ Arc de Triomphe is being wrapped in fabric